Xiaolin Showdown is an American animated television series that aired on Kids' WB and was created by Christy Hui. Set in a world where martial arts battles and Eastern magic are commonplace, the series follows four young Xiaolin warriors in training who battle the Heylin forces of evil. They do this by protecting Shen Gong Wu (ancient artifacts that have great magical powers) from villains that would use them to conquer the world. Typical episodes revolve around a specific Shen Gong Wu being revealed which results in both sides racing to find it. Episodes usually reach a head when one good and one evil character must challenge each other to a magical duel called a Xiaolin Showdown for possession of the artifact.

A follow-up series, Xiaolin Chronicles, previewed on August 26, 2013 on Disney XD. It began its long-term run on September 14 the same year, but ran for only one season and 26 episodes, later ending on Netflix in July 1, 2015 in the U.S.

Series creator Christy Hui has stated that despite the growing popularity of anime in the United States, she preferred to create a show that was a "fusion of Eastern and Western culture". Xiaolin Showdown shows subtle influences of Eastern art, action, and philosophy, but also includes very Western characters and humor.

Following the success of its first season, a second twenty-six episode season was ordered, and a third after that, resulting in 3 seasons and 51 episodes. The show has ended and despite heavy promotion in other media, including Postopia, a trading card game, and a video game, Warner Bros. have not shown any signs of releasing the second and third seasons on DVD.

The series was followed by Xiaolin Chronicles, which premiered on August 26, 2013. Actress Tara Strong strongly hinted via Twitter that episodes were being produced, which was confirmed by fellow series star Grey DeLisle when she appeared on the March 9, 2012 episode of actor Rob Paulsen's podcast, and by series creator Christy Hui in her Facebook account.

Four young monks – Omi, Kimiko, Raimundo, and Clay – are forced into cooperation at the Xiaolin Temple after learning they are chosen to become Xiaolin Dragons. They become friends and work together traveling the world in search for Shen Gong Wu, mystical objects with powers that balance the forces of good and evil. Along the way, they must battle wannabe evil boy genius Jack Spicer, and the evil Heylin sorceress Wuya, whom Jack inadvertently frees from a 1500-year imprisonment in a puzzle box by Grand Master Dashi. Through thievery, Spicer ultimately possesses enough Shen Gong Wu to form Mala Mala Jong, an ancient monster that Wuya uses to help her gain control of the world. Raimundo defies orders and fights the monster, causing the remaining monks to fight and defend the remaining Shen Gong Wu in the Temple's possession. All the monks, except for Raimundo because of his reckless disobedience, are promoted to Xiaolin Apprentices due to their bravery. Angered, Raimundo joins the Heylin side and helps Wuya regain her human form.

Omi travels back in time and receives a second puzzle box from Grand Master Dashi, who trapped Wuya in the puzzle box 1500 years ago. But with no way back to the future, he freezes himself using the Orb of Tornami. In the present time, Omi breaks free of the ice with the puzzle box in hand. Raimundo decides that his rightful place belongs in the Xiaolin Temple with his friends and traps Wuya in the new puzzle box. After returning to the Temple, the monks continue their search for the Shen Gong Wu. Eventually, Master Fung promotes Raimundo to Xiaolin Apprentice.

Afterwards, the monks are introduced to Xiaolin monk-turned-evil villain Chase Young. Chase takes an interest in Omi and becomes determined to manipulate his mind into joining the Heylin side. When Master Fung becomes trapped in the Ying-Yang World, Omi asks for help from Chase. He succeeds in rescuing Master Fung; however, upon leaving the Ying-Yang world, his bad chi takes over and he joins the Heylin side. Chase succeeds in restoring Wuya to her human form, though he takes her powers. The remaining monks soon learn that Chase had sent Master Fung into the Ying-Yang World knowing the events that would unfold afterwards, including Omi joining his side.

Kimiko, Clay, and Raimundo travel to the Ying-Yang World to retrieve Omi's good chi and return him to the Xiaolin side. After gaining Omi back, the monks are promoted to Wudai Warriors. They are then introduced to Hannibal Bean, an evil villain from the Ying-Yang World who is responsible for turning Chase Young to the Heylin side.

Toward the end of their journey, Master Fung tells the monks that they have one final quest before the team's leader, the Shoku Warrior, will be revealed. Omi decides that he will stop Hannibal Bean from turning Chase to the Heylin side. He ends up freezing himself in order to travel to the future to find the Sands of Time. Through time travel, he succeeds by switching the Lao-Mang-Long Soup with pea soup. However, when he returns to his present time, he learns that his actions have made things worse: instead of Chase joining the Heylin side, it is Chase's former friend, Master Monk Guan, whom Hannibal Bean turns evil. The monks and Chase are captured by Hannibal Bean, Wuya, and the evil Guan; Chase sacrifices his good self to save the monks and give them the opportunity to fight and return everything to the way it was. The monks succeed, and the timeline is fixed.

In the end, Raimundo is revealed as the Shoku Warrior. The series concludes with every villain attacking the temple, and the Wudai Warriors led by Raimundo proceeding to counterattack.

Xiaolin Showdown features a large cast, many of whom only appear in one episode and occasionally return for cameos or for single episodes later in the series. While supporting characters are often one dimensional and serve an immediate purpose in the episode in which they appear, main characters are often well developed with strengths and flaws that become present as the series progresses.

The focus of the series is on collecting the fictional Shen Gong Wu, mystical artifacts that have magical powers, activated by saying the artifact's name aloud. Wuya's release caused Shen Gong Wu to reveal themselves. They are primarily used in Xiaolin Showdowns. The first Xiaolin Showdown was between Grand Master Dashi and Wuya. It was a great battle, in which Dashi used the Shen Gong Wu against Wuya's Heylin magic. Eventually, Grand Master Dashi was the victor, and Wuya was trapped within a mystical puzzle box. Determined to ensure that Wuya would not be able to get her hands on the Shen Gong Wu and rule the world with them, Grand Master Dashi and the dragon Dojo hid them all over the world. Dashi then created the Xiaolin Temple and began a lineage of Xiaolin Warriors to prevent the Shen Gong Wu from falling into the wrong hands. Should Wuya ever be freed, the Xiaolin Warriors would rise up and fight the forces of the Heylin.

A Shen Gong Wu can only be located when it chooses to reveal itself, at that point both Wuya and Dojo can sense its activation and can find its general location. Wuya can tell what Shen Gong Wu has revealed itself, while the Xiaolin must defer to the Ancient Scroll of the Shen Gong Wu to find out which one has been revealed. Chase Young is also capable of anticipating when a new Shen Gong Wu is revealed.

In Xiaolin Chronicles, many Shen Gong Wu are redesigned and even renamed, such as the Orb of Tornami, Sword of the Storm, Fist of Tebigong, and Monkey Staff.

The challenge in a Xiaolin Showdown can be anything, but most commonly is some sort of race to the Shen Gong Wu. When the Showdown is called, the world warps around the competitors and by-standers, and the terrain they are on becomes an extreme extent, such as a mountainside becoming a field of rock pillars, or a snowfield becoming a large snowboarding course. Some Showdowns have also affected those involved, such as gaining weight for a sumo wrestling showdown. Other contests have been games of tag, basketball, or combat. The challenge officially begins after the change, and when both (or all) combatants yell "Gong Yi Tanpai!" Then the decided contest starts. When one is victorious, the terrain returns to normal, and the winner gains possession of all the wagered Shen Gong Wu.

Omi inadvertently gave the competition its name when he traveled back in time in episode "Days Past" to ask Grand Master Dashi to make another puzzle box to imprison Wuya.

Xiaolin Showdown was a huge hit for the Kids WB network and it ranked at the no.1 position against all other Saturday morning competition mainly between kids aged 6–14.

Konami developed a Xiaolin Showdown video game, that was released on November 10, 2006 for PlayStation 2, PlayStation Portable, Xbox, and Nintendo DS.

In addition, Wizards of the Coast released a trading card game based on the series.

A Season One DVD has been released. It is a 2-disc set, and has special features on disc 2, but the only features are trailers for other shows and movies. On January 10th, 2017, Amazon acquired the rights to produce Season 2 on DVD, but will only print copies on demand, taking several days extra. On April 11, 2017, the 3rd and final season was released as a Manufacture on demand release. All seasons and Xiaolin Chronicles are available on Amazon Instant Video and iTunes in HD.

On September 14, 2013, a continuation of the series, Xiaolin Chronicles premiered. The series was standalone that is not canon to Showdown. Chronicles features a new ally of the main characters named Ping Pong as they continue their fight against Wuya, Jack Spicer and Chase Young.

Xiaolin Chronicles is a Canadian animated/CG television series presented as a continuation of the formerly Warner Bros. Animation's series, Xiaolin Showdown. The series premiered on August 26, 2013, with three back-to-back episodes serving as a preview. The full series premiered on September 14, 2013. It was produced by ActionFliks Media Corporation in collaboration with the French studio Genao Productions, the second animated series without the involvement of Warner Bros. Animation (since Johnny Test). Due to copyright some elements of the original show had to be changed.

The show aired for twenty episodes from August 26, 2013 to March 6, 2014 on Disney XD, leaving the last six episodes unaired in the United States until July 1, 2015, when Chronicles was made available to watch on Netflix.

In a newsletter published on July 25, 2015, creator Christy Hui announced that Chronicles will not continue with a second season and will be a standalone series. However, she stated that there will be a new Xiaolin project that will continue in a format to that of Showdown.

Produced in France and the United States with Christy Hui returning as executive producer, the show is animated in 2D animation while CGI was used for all of the Xiaolin Showdown scenes. The show features new character designs and a slightly altered logo for the show. With the exception of Tara Strong (Omi, Ping Pong) and Jennifer Hale (Kimiko in Chronicles only, Katnappe, Willow), all of the original English voice cast was replaced due to the show moving to Canadian actors. All Shen Gong Wu from the original series had to be renamed, because of this, Warner Bros. Animation have no involvement with this animated series, and does not plan to integrate it with ActionFliks Media Corporation and Genao Productions, but ActionFlicks Media now owns the titles and rights to the names. 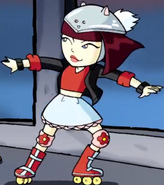