The division was founded in 1992 to produce more family-friendly films. The first theatrical film released under the Family Entertainment label was Dennis the Menace, released in the summer of 1993. The film proved to be a huge hit at the box office, grossing over $50 million at the domestic box office despite receiving negative reviews from critics. Following it was Free Willy, which was also released in the summer of 1993 and would also be a huge box office hit, grossing over $75 million domestically.

Other 1993 releases included a live-action film adaptation of the book The Secret Garden, which didn't perform as well as the previous two films but still garnered over $30 million at the domestic box office, and George Balanchine's The Nutcracker. The last 1993 WBFE theatrical release was Batman: Mask of the Phantasm, and it wasn't a success at the box office, getting only $5 million at the box office compared to its $6 million budget, due to a lack of promotion from Warner Bros.

1994 was the worst year for WBFE, where it was home to numerous box-office bombs. In the early part of 1994, Warner released Thumbelina, which was a major box-office bomb. Another 1994 film was a live-action rendition of the book Black Beauty, which was another box-office bomb for the studio, grabbing only nearly $5 million at the box office. Following it was A Troll in Central Park, which garnered less than $1 million at the box office. The last two films in 1994 were Little Giants, which performed better, but only received nearly $20 million domestically and Richie Rich, which was only a minor box-office bomb, grossing over $38 million for its $40 million budget.

In 1995, it brought a live-action rendition of the book A Little Princess, which only got over $10 million in its domestic release. Other films that year included international distribution of The Pebble and the Penguin (MGM holds the US rights to the film), which was a box-office bomb, grossing nearly $4 million, and Born to Be Wild, which also garnered nearly $4 million. However, the biggest success of 1995 for the company was the sequel to Free Willy, Free Willy 2: The Adventure Home, which, although not nearly as successful as the first film, was a minor success, garnering over $30 million.

1996 saw WBFE's biggest hit yet, Space Jam, which garnered over $90 million domestically. The following year, the division released Turner Feature Animation's Cats Don't Dance (inherited from Turner Pictures as a result of Time Warner's merger with Turner Broadcasting), which bombed at the box office with over $3 million earned stemming from a lack of promotion. The next 1997 film was a sequel to The Swan Princess, The Swan Princess: Escape from Castle Mountain, but it performed poorly at the box office mainly because of a limited theatrical release. The final 1997 film was the third Free Willy film, Free Willy 3: The Rescue, which performed poorly, grossing over $3 million.

In 1998, it released Warner Bros. Animation's Quest for Camelot, which would be a box-office bomb, but grossed more than previous films released by the company, grossing nearly $23 million domestically. In 1999, it brought two more films from Warner Bros. Animation, the poorly performed The King and I, which only grossed nearly $12 million, and Brad Bird's The Iron Giant, which was also a box-office bomb, grossing over $23 million. (The Iron Giant, however, would go on to become a cult classic through video releases and TV airings, and is now hailed as one of the best animated films of all time. Also, despite having WBFE logos in trailers and TV spots, director Brad Bird opted against using the WBFE logo on giant to maintain a sense of seriousness, and instead created a custom Warner Bros. Feature Animation logo, the only film to use said brand.) The only film released under WBFE in 2000 was My Dog Skip, which became the company's first major box-office success in nearly four years, grossing nearly $35 million. Beginning with My Dog Skip, WBFE's later theatrical films used the standard Warner Bros logo (likely because of WBFE's poor box-office track record), and the Family Entertainment logo was only used on foreign films, TV shows, and direct-to-video films from there-on out.

Two more family films were released in 2001 through WBFE. Cats & Dogs was proved to be one of the biggest successes of the company's history, grossing over $200 million worldwide. The next film, Osmosis Jones, was hoped to follow the previous two films in the success line-up, but sadly flopped, only grossing nearly $15 million. It wasn't until 2004 that another film from WBFE was released, Clifford's Really Big Movie, which was another box-office bomb, mainly because of opening under 500 screens, grossing only over $3 million.

WBFE also served as the label for children’s and family-friendly entertainment programming that were not made by Warner Bros., but were distributed by the company, such as ALF’s Animated Adventures and the original ThunderCats, as well as TV specials and telefilms including Rankin-Bass’ The Hobbit, The Lord of the Rings and Dr. Seuss’ How the Grinch Stole Christmas!. The label also covered Hanna-Barbera cartoons such as The Flintstones, The Jetsons, Scooby-Doo, Where Are You?, The Yogi Bear Show, and The Smurfs; DC Comics cartoons such as Super Friends, Justice League of America: The Filmation Animated Adventures; and Turner Entertainment cartoons such as The Tom and Jerry Comedy Show and The New Adventures of Gilligan.

The use of WBFE as the opening logo for Warner Bros. Animation productions ceased in 2007, and beginning in 2008, the WB Animation logos have been used at the beginning and ends of shows. The WBFE logo continues to be seen on the various movies and shows under its' name from the 1990s and 2000s, as well as newer prints of the aforementioned inherited and library titles.

WBFE continued operations in Germany until 2009, after releasing Laura's Star and the Mysterious Dragon Nian.

It features an standard Warner Bros. shield with the banner reading "Family Entertainment". Bugs Bunny in a tuxedo, steps out from behind the shield, does a vanna pose, and leans on the banner. Bugs would take a bite from his carrot as the banner shines.

Starting with Quest for Camelot, the shield in now rendered in CGI with the same animation from the 1998-2020 Warner Bros. Pictures logo and the animation of Bugs Bunny is reused, except he is animated digitally. 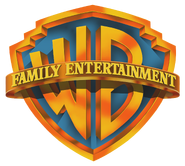 The logo without Bugs Bunny.

The 1997 brand logo used on VHS and DVD Covers

The 75 Years variant. Seen on Dennis the Menace Strikes Again (1998)

The 75 Years variant print logo used on Quest for Camelot

The logo with the AOL Time Warner byline.

The logo as seen on a holiday promo 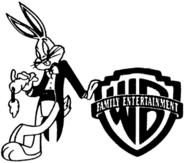