Harry Potter and the Philosopher's Stone

The Underground Chambers was a path of obstacles guarding the Philosopher's Stone. Each faculty member of Hogwarts has they’re own chamber set to protect it.

The first course is from the Hogwarts gatekeeper Rubeus Hagrid. His Hell Hound Fluffy was living above the trap door in the forbidden corridor. The only way to get into the Chambers and past him is by putting a spell on the harp to have him sleep to music.

The second course is from the herbology teacher Professor Sprout. The entire room is covered in magic deadly vines which are known as Devil Snare. The only way to get through it is to relax other wise it will only kill it’s Victim quicker.

The fourth course is from the charms class teacher Filius Flitwick. The only way to get through the door is by catching the big gold key on a broomstick without getting harmed by the other flying keys.

The fifth course is a gigantic chess board from the transfiguration instructor Minerva McGonagall. They only way to get through is that the intruder plays the black team and beat the white team.

Chamber 5: The Mirror of Erised

The seventh and final course is the legendary Mirror of Erised which is almost impossible and was set by Hogwarts Headmaster Albus Dumbledore. The Mirror would only give the stone who would not use it but would make sure it’s in good hands. 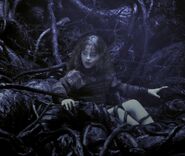 In the book, there were seven obstacles that guard the Philosopher's Stone, but in the film, two of them were omitted: Quirrell's Mountain Troll and Snape's Potion riddle.