Tomb Raider is a 2018 action-adventure film directed by Roar Uthaug and written by Geneva Robertson-Dworet and Alastair Siddons, from a story by Evan Daugherty and Robertson-Dworet. It is based on the 2013 video game of the same name, with some elements of its sequel by Crystal Dynamics, and is a reboot of the Tomb Raider film series. The film stars Alicia Vikander as Lara Croft, in which she embarks on a perilous journey to her father's last-known destination, hoping to solve the mystery of his disappearance. Dominic West, Walton Goggins, Daniel Wu, and Kristin Scott Thomas appear in supporting roles.

Principal photography took place from January to June 2017 at the Warner Bros. Studios in the United Kingdom and in Cape Town, South Africa. The first Tomb Raider film not to be distributed by Paramount Pictures, it was released in the United Kingdom on March 14, 2018 and in the United States on March 16, 2018, by Warner Bros. Pictures in RealD 3D, IMAX 3D and IMAX. The film met with mixed reviews from critics, who criticized the "boring" plot, while Vikander's performance as Lara Croft drew a polarized response; some described her as a "capable, powerful and unobjectified heroine", and others called her character bland and a "punching bag and onlooker".[7]

Following the disappearance of her father Richard, Lara Croft lives a reckless and carefree life as well as being in debt with her boxing club. When she is arrested after a bike accident involving a police car, Richard's business partner Ana Miller posts her bail and warns her that if she does not claim her inheritance, her father's estate will be sold off. Lara reluctantly accepts and comes into possession of the key to her father's office. There she finds a pre-recorded message from Richard detailing his research into Himiko, the mythical Queen of Yamatai who was said to command the power over life and death. According to the myth, Himiko was capable of killing people by simply touching them, and one day, her generals chained her up and sent her to a remote island to be buried alive, so that she could harm no one anymore. Richard warns Lara to destroy all of his research but Lara decides to investigate further.

Lara travels to Hong Kong where she is nearly mugged by three goons, only to be thwarted by Lu Ren, captain of the ship Endurance, who is drinking due to his father's death when he and Richard went to sail to an island believed to have once been Yamatai. Lara soon bribes Lu Ren to take her there. The ship capsizes in a violent storm and Lara is washed ashore where she is knocked unconscious. She is revived by Mathias Vogel, the leader of an expedition to locate Himiko's tomb. The expedition has been funded by a shadowy organisation called Trinity that seeks to harness and weaponise Himiko's power. Vogel takes Lara prisoner, claiming that he killed her father and intends to use Richard's research to continue his expedition. Lara escapes with the help of Lu Ren, who survived the storm and has been put to work with the local fishermen digging for Himiko's tomb. She evades capture but is seriously wounded in the process and passes out from her injuries.

Lara regains consciousness after nightfall and is forced to kill Rocket, a Trinity guard, when she is nearly discovered. She follows a mysterious figure wandering the island and discovers that the figure is her father, who has himself been held captive on Yamatai. After convincing him that she is real, Richard treats her injuries and despite his protests, Lara sets off to recover his research from Vogel's camp. Lara makes contact with Lu Ren and he, along with the fishermen, stage distractions, allowing Lara to infiltrate the Trinity camp and recover her father's research. In the ensuing chaos, Richard makes his way to the tomb and is captured by Vogel, who persuades Lara to open Himiko's tomb.

The party navigate a series of booby traps before locating Himiko's sarcophagus. Two Trinity soldiers attempt to remove her corpse but become infected by Himiko's "power over death", so potent that mere physical contact instigates immediate bodily disintegration. It turns out that Himiko was not actually a witch who could kill people with a touch according to myth, but rather a carrier of such deadly disease that was spread by touch. On the contrary, she chose to be buried alive in order to save her people from certain death. The infected soldiers, now out of control, are shot by Vogel, who then concludes that he cannot remove Himiko's body, so instead settles for detaching a finger which he bags and places in his shirt pocket. In the confusion, Lara and Richard overpower the remaining soldiers, though Vogel escapes and Richard becomes infected. Knowing there is no cure, he proposes destroying Himiko's tomb to prevent the virus spreading across the world. Lara gives chase to Vogel, confronting him as Richard sets off a bomb, killing himself and sealing the tomb. Upon defeating Vogel in a fierce fight, Lara pulls Himiko's bagged finger from his pocket and shoves it down his throat before kicking him down a deep chasm just as the infection takes over. She is rescued by Lu Ren and the fishermen, who then commandeer a Trinity helicopter to escape Yamatai.

Lara returns to London, where she formally accepts her inheritance and inadvertently discovers that Trinity's front company is actually owned by Croft Holdings. She proceeds to investigate Trinity further among her father's files and begins to suspect that Ana Miller is one of their agents who manipulated her into accepting her inheritance in order to have Lara sign over control of Croft Holdings' business operations to her. Having witnessed Trinity's ruthlessness first-hand, she prepares for her next adventure to thwart their sinister plans.

When Lara goes to the pawn shop where she sold her necklace to buy it back, she notices they also sell guns and buys two Heckler & Koch USP Matchs.

GK films first acquired the rights to the film in 2011.[9] Norwegian director Roar Uthaug came on board in November 2015[10] and Alicia Vikander was announced to be the new Lara Croft in April 2016.[11] Deadline had previous reported that Daisy Ridley was considered for the role at one point, though she later claimed in an interview that it was just a "crazy rumor".[12][13] Walton Goggins was announced to play the villain in December 2016.[14][15][16] Much of the rest of the cast was revealed in early 2017.[17][18][19]

Tomb Raider premiered on March 2, 2018 in Berlin, Germany at an exclusive preview with invited guests and cosplaying fans.[2][3] It is scheduled to be released in the United States on March 16, 2018, by Warner Bros. Pictures,[24] days after the fifth anniversary of the franchise's video game reboot. The film will get an IMAX 3D and a RealD 3D release.[25]

In the United States and Canada, Tomb Raider was released alongside Love, Simon and I Can Only Imagine, and is projected to gross $23–29 million from 3,854 theaters in its opening weekend.[26] The film made $2.1 million from Thursday night previews.[27]

Internationally the film opened in nine Asian countries a week prior to its United States debut. It made $14.2 million over the weekend, with Korea's $2.9 million being the biggest market.[28]

On review aggregator website Rotten Tomatoes, the film holds an approval rating of 50% based on 141 reviews, and an average rating of 5.3/10. The website's critical consensus reads, "Tomb Raider reboots the franchise with a more grounded approach and a star who's clearly more than up to the task — neither of which are well served by an uninspired origin story."[29] On Metacritic, which assigns normalized rating to reviews, the film has a weighted average score of 46 out of 100, based on 44 critics, indicating "mixed or average reviews".[30]

Michael Phillips of the Chicago Tribune gave the film 2 out of 4 stars and said, "The Lara Croft reboot Tomb Raider isn’t half bad for an hour. Then there’s another hour. That hour is quite bad. It’s no fun watching your action heroine get shoved, punched and kicked to the sidelines of her own movie, while the menfolk take over and take turns overacting before expiring."[31] Todd McCarthy of The Hollywood Reporter gave the film a mixed review, criticizing the story but praising Vikander, writing, "When all the one-dimensional supporting characters and familiar action moves fall by the wayside, the one thing left standing is Vikander...The film strains credulity even for a vid-game fantasy by letting the leading lady recover awfully quickly from bad injuries, but other than that Vikander commands attention and is the element here that makes Tomb Raider sort of watchable."[32]

Producer Adrian Askarieh told IGN in an interview that he may oversee a film universe with Just Cause, Hitman, Tomb Raider, Deus Ex, and Thief.[33] 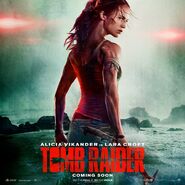 Retrieved from "https://warnerbros.fandom.com/wiki/Tomb_Raider?oldid=88125"
Community content is available under CC-BY-SA unless otherwise noted.