Meg: A Novel of Deep Terror by Steve Alten

The Meg is a 2018 science fiction horror film directed by Jon Turteltaub with a screenplay by Dean Georgaris, Jon Hoeber, and Erich Hoeber, based on the 1997 book Meg: A Novel of Deep Terror by Steve Alten. The film stars Jason Statham, Li Bingbing, Rainn Wilson, Ruby Rose, Winston Chao, and Cliff Curtis, and follows a group of scientists who must stop a 75-foot Megalodon shark from terrorizing a beach.

Disney originally purchased the film rights to the book in the 1990s, but after several years in development hell the project landed at Warner Bros. Turteltaub and much of the cast joined by September 2016, and filming began the following month in New Zealand.

An American-Chinese co-production, The Meg was released in both countries on August 10, 2018, in Real D 3D, Dolby Cinema, and IMAX. It received mixed reviews from critics, with some describing it as an entertaining B-movie and others calling "neither good enough or bad enough" to be fun.

Jonas Taylor, a rescue diver, attempts to save a group of scientists in a nuclear submarine, among them Dr. Heller, from a massive, underwater shark attack. Taylor is able to rescue some of the scientists but refuses to go back to save the rest, having realized that going back for the rest would mean the death of them all.

Five years later, Jack Morris meets Dr. Minway Zhang at an underwater research facility called "Mana One", which Morris finances. Zhang and his daughter, Suyin, an oceanographer, are supervising a mission to dive further into the depths of the Marianas Trench, believing that the bottom is not really a floor, but rather a gas cloud. The mission is being conducted by Lori, Taylor’s ex-wife, Toshi and the Wall in a submersible. The mission appears to be going well, until a very large object hits the submersible and causes it to lose contact with Mana One.

James "Mac" Mackreides, another crew member at the station, suggests sending Taylor down to attempt a rescue after he suspects the object which hit the underwater ship to be Megalodon, a giant shark thought to have been extinct 1 to 2 million years ago. Despite Dr. Heller's objections, Zhang and Mac decide to travel to Thailand to recruit Taylor anyway. Jonas agrees to help the three scientists stranded in the submersible.

During a towing and rescue mission, Suyin encounters a colossal squid and is nearly crushed by its grasp. She is saved when the Megalodon kills the squid. Jonas reaches the trapped submersible and saves Lori and The Wall. However, when the Megalodon comes back to attack, Toshi sacrifices himself by closing the hatch door, allowing Jonas, Lori and The Wall to escape safely.

Back at Mana One, the crew makes the discovery that the gas barrier was temporarily broken during the escape, causing a temperature swing. This was the reason many sharks, including the Megalodon, escaped from the depths of the trench. The group decides to track and poison the shark. They were able to find the Megalodon in an area where shark poacher boats have been obliterated. The group finds the shark and Jonas successfully poisons it.

Despite being successful in poisoning and killing the Megalodon, a second one emerges from the water and attacks the boat. The Wall gets eaten by the second Megalodon, Dr. Heller splashes around in the water to direct the shark away from the boat and Minway succumbs to his injuries after the crew makes it back to Mana One since his head was impacted by a lifeboat during the attack.

When nightfall arrives, Morris later attempts to destroy the Megalodon himself by ordering a helicopter crew to chuck modified depth charges at it. However, he is unsuccessful as the depth charges kill a whale instead and he is flung out of a speeding boat. When Morris takes refuge on the carcass and awaits help, he is eaten by the Megalodon. Taylor and the remaining Mana One crew successfully put a tracker on it, but to realize that the Megalodon is en route to a crowded beach on the Chinese mainland.

Jonas and Suyin attack the Megalodon in submersibles in efforts to finally kill it. However, the rest of the crew is forced into the water when the oil tanker they are on explodes due to a falling helicopter. Jonas is nearly eaten by the Megalodon when it breaks his submersible, but he cuts the Megalodon in an attempt to make it bleed. When it bleeds, other sharks in the area eat the Megalodon, finally killing it. Jonas encounters Suyin in her submersible and the two take refuge on the boat seen before the shark attacked the beach. The remaining crew members are seen on the boat, implying that Suyin had evacuated everyone to safety.

The rights to the novel were initially acquired by Disney's Hollywood Pictures in 1996. However by 1999 the project had stalled and the rights reverted back to Steve Alten, the book's author.

In 2005, reports surfaced that the project was being developed by New Line Cinema, with a slated release of summer 2006. Names that were attached to the production included Jan de Bont as director, Guillermo Del Toro as producer and Shane Salerno as screenwriter. However, New Line later cancelled the project due to budget concerns. The rights reverted again to Alten, but the film remained in development hell.

In 2015, it was announced that the film was moving forward at Warner Bros., with a new script penned by Dean Georgaris. By June of that year Eli Roth was reported to be in talks to direct, however due to creative differences he was replaced by Jon Turteltaub in early 2016. Jason Statham and much of the cast joined in August and September 2016.

The Meg was originally scheduled to be released by Gravity Pictures in China and by Warner Bros. Pictures in the United States on March 2, 2018. Warner Bros. Pictures and China's Gravity Pictures then said that the film will release during the 2018 Chinese New Year period in China. The week-long annual holidays kicked off on February 16, 2018, some two weeks ahead of the March 2, 2018 date. The film was then pushed back to be released on August 10, 2018, in 3D and IMAX.

The first official trailer was released on YouTube on April 9, 2018.

The Meg was released for digital download on October 30, 2018, and will be released on Ultra HD Blu-ray, Blu-ray and DVD on November 13.

In the United States and Canada, The Meg was released alongside Slender Man and BlacKkKlansman, and is projected to gross $20–22 million from 4,118 theaters (the second-highest August total ever) in its opening weekend. The film made $4 million from Thursday night previews, leading some analysts to predict it would outperform its low-$20 million projections.

On the review aggregation website Rotten Tomatoes, The Meg has an approval rating of 52% based on 130 reviews, with an average rating of 5.6/10. The site's critical consensus reads, "The Meg sets audiences up for a good old-fashioned B-movie creature feature, but lacks the genre thrills—or the cheesy bite—to make it worth diving in." On Metacritic, the film has a weighted average score of 45 out of 100, based on 41 critics, indicating "mixed or average reviews."

Owen Gleiberman of Variety gave the film a mixed review, calling it "neither good enough or bad enough," and writing, "The Meg, a rote sci-fi horror adventure film that features a shark the size of a blue whale, comes on like it wants to be the mother of all deep-sea attack movies. But it's really just the mother of all generically pandering, totally unsurprising Jaws ripoffs." In a more positive review, Alex Hudson from Exclaim! said the film succeeded nicely on modest terms; "As pulpy action films go, this is the best blockbuster about prehistoric monsters you'll see this summer. Sorry, Jurassic World." Scott Mendelson of Forbes was impressed by the film's special effects and called it "a polished B movie that delivers the goods," while IGN's William Bibbiani praised the performances of the cast, particularly Statham and Bingbing. 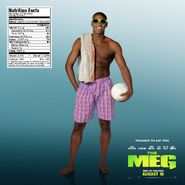 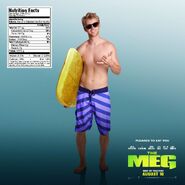 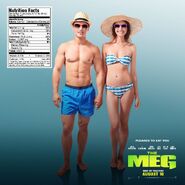 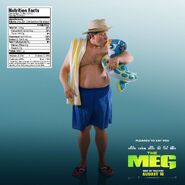 Differences between the novel and the film

Retrieved from "https://warnerbros.fandom.com/wiki/The_Meg?oldid=114026"
Community content is available under CC-BY-SA unless otherwise noted.