The King and I Animated Thinking Adventure

The King and I Animated Thinking Adventure is a computer game that was based on the 1999 animated film of the same name and published by Sound Source Software.

Starring characters from the 1999 animated film of the same name, this software program for kids ages 4 to 9 (in schools and residential uses) is designed to stimulate critical and developmental thinking skills. It contains appealing and dazzling 3D graphics and characters that will attract and provide a powerful learning environment for most children.

Also, it features some adjustable skill levels that will match your child's growing abilities, rewards and surprises that encourages extended play, and hours of creative fun with printable cards, awards and flyers.

Activities (including Games and Puzzles)

It contains a number of activities including eight educational games and puzzles that involves your child in problem-solving, planning, observation and deduction, memory challenges, observable physics, music and creative design.

A screenshot along with Anna and the Royal Children in Anna's Umbrella Game. 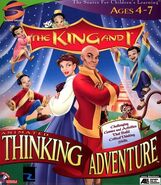 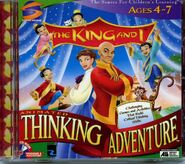 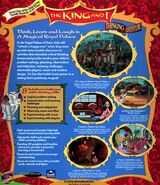 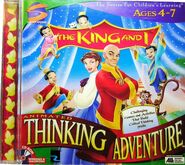 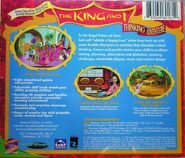 Retrieved from "https://warnerbros.fandom.com/wiki/The_King_and_I_Animated_Thinking_Adventure?oldid=81076"
Community content is available under CC-BY-SA unless otherwise noted.