Not to be confused with Gremlins (groups)

Looney Tunes: Back in Action (cameo in a picture)

The Gremlin is a Gremlin that Bugs fought in the cartoon "Falling Hare". In the end he actually succeeds at defeating Bugs Bunny. This makes him one of only three characters to do this, the other two being Cecil Turtle and Elmer Fudd (only in certain shorts). Unlike Cecil, though, the Gremlin is clearly the antagonist, similar to Elmer. Even though he defeated Bugs, by the end of the "Falling Hare" cartoon, they somehow called a truce.

He also appears in the Tiny Toon Adventures episode "Journey To The Center Of Acme Acres", voiced by Don Messick. He also made a brief cameo in the Animaniacs episode "Plane Pals" as a passenger. 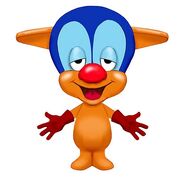 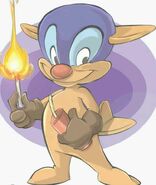