Teen Titans is a series of video games based on the animated television series Teen Titans. Unlike some cross-platform games of both then and now, the 4 versions (Game Boy Advance, PlayStation 2, Nintendo GameCube and Xbox) are each different games.

A video game released for the Game Boy Advance on October 16, 2005. The game is based on the television show Teen Titans and features the five main characters from the show as playable characters: Robin, Raven, Beast Boy, Starfire, and Cyborg. The game's boss characters are Gizmo, Jinx, Mammoth, and Brother Blood. The game was going to be released in Europe shortly after its release in North America, though the European release was later cancelled. A sequel, Teen Titans 2: The Brotherhood's Revenge, often shortened to simply Teen Titans 2, was released exclusively in North America for the Game Boy Advance on October 23, 2006.

The game features the Teen Titans (Robin, Raven, Cyborg, Starfire, and Beast Boy) as playable characters in story mode. Players are able to switch between any of the five Titans in real time, each with unique fighting abilities, and the game allows up to four players simultaneously.

Aside from the game's story mode, players can fight against each other in a versus battle mode, known as Master of Games, with 31 unlockable characters. Many of the characters from the animated series appear within the game, all of whom (with the exception of Mad Mod) retain their voice actors from the show. 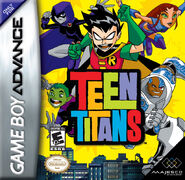 Retrieved from "https://warnerbros.fandom.com/wiki/Teen_Titans_(video_game)?oldid=82971"
Community content is available under CC-BY-SA unless otherwise noted.