Brainiac's Skull Ship is a spaceship transport that resembles the head of the Coluan, Brainiac. It is also used by Brainiac to steal cities and keeping it in his collections.

The Ship is set to appears in the upcoming Rocksteady Studios Game, Suicide Squad: Kill The Justice League along with Brainiac Himself.

The Pre-Crisis origin of the ship is that it was designed by Brainiac Himself, resembling his own head. The Ship was destroyed when the Villains used it to defeat the Anti-Monitor.

Following the events of Crisis on Infinite Earths, The Ship is no longer exist in the Post-Crisis Continuty because of Brainiac was reinvented and his city-stealing ways forgotten about. But it was again reintroduced again in the Action Comics: Brainiac Comic Storyline, It was destroyed when Lex Luthor destroyed the containment field that is holding one of the many cities Brainiac Collected, it became larger within the ship, causing the Skull Ship to explode into dust.

This version of the Skull Ship in the Post-Flashpoint (New 52) Continuty lacked the shape of the iconic Skull, When Brainiac was defeated by Superman, the ship served as Superman Fortress of Solitude.

The Skull Ship Falling down in Injustice 2

Argo City being taken by the Skull-Ship

The Skull Ship in the upcoming Rocksteady game 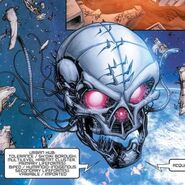