Rudolph the Red-Nosed Reindeer, popularly known as "Santa's ninth reindeer," is a fabled reindeer created by Robert Lewis May. Rudolph is usually depicted as the lead reindeer pulling Santa's sleigh on Christmas Eve, though he is a young buck who has only adolescent antlers and a glowing red nose. Though he receives scrutiny for it, the luminosity of his nose is so great that it illuminates the team's path through harsh winter weather.

Rudolph first appeared in a 1939 booklet written by Robert L. May and published by Montgomery Ward, the department store.

The story is owned by The Rudolph Company, LP and has been adapted in numerous forms including a popular song, the iconic 1964 television special and sequels, and a feature film and sequel. Character Arts, LLC manages the licensing for the Rudolph Company, LP. In many countries, Rudolph has become a figure of Christmas folklore. 2014 marked the 75th anniversary of the character and the 50th anniversary of the television special. A series of postage stamps featuring Rudolph was issued by the United States Postal Service on November 6, 2014. 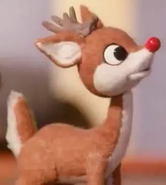 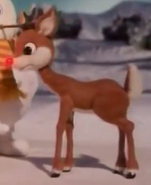 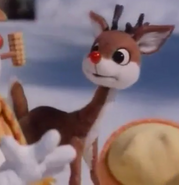 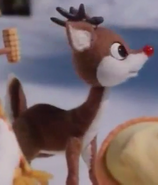 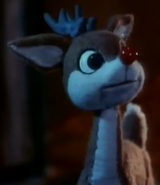 Retrieved from "https://warnerbros.fandom.com/wiki/Rudolph_the_Red-Nosed_Reindeer?oldid=73873"
Community content is available under CC-BY-SA unless otherwise noted.