The Amazing World of Gumball

Richard Watterson is Gumball's and Anais' father from The Amazing World of Gumball.

Richard is the father figure in the Watterson family but does not seem to possess any responsibility or common sense. He is very childlike and lazy and is not a good role model for his children either. However, Richard genuinely loves his family, and has good intentions, despite his severe lack of intelligence and maturity as seen especially in "The Prank" and "The Authority."

He also greatly enjoys eating, especially when it comes to sausages. As a result, he is overweight. His obsession with food can sometimes be his undoing, such as when he was supposed to help his wife in "The Spoon," but he ends up licking a sausage on the floor instead. He can also sense when there is toast nearby, as seen in "The Recipe." Due to his continuous hunger, he gained an instinctive-like nature, as seen in the "The Game" and many other episodes, where he runs toward any food he sees.

Richard is very childlike and has been seen exhibiting childish behaviors in several episodes. His behaviors include believing ghosts, joining in some of Gumball's misadventures, believing in Santa, and much more. He also has a very hypocritical sense of humor. He enjoys pulling pranks and laughing at people, but hates it when others prank or laugh at him, saying that "it's only funny when it happens to someone else."

The motive for Richard's personality was shown in "The Authority," where it was revealed that Granny Jojo sheltered Richard his entire life, leading him to grow up as an unintelligent and lazy person. In "The Man," it was revealed that Richard's father walked out on him when he was young, claiming he was going out to buy some milk. Richard still believed it out of denial, even into his adult life.

Despite his incompetency and childishness, Richard can occasionally spout out some good advice. In "The Gift," he was the one telling his sons to give Masami friendship (which they later did), and he manages to tell Nicole some very good, philosophical advice about life. It is also possible that Richard has a sufficiently sized brain, just he neglects to use it. As seen in "The Fuss" when he tried to think, a large cramping mass grew rapidly in size and made his veins stand out on his head.

On a side note, he seems to be effeminate, as he is shown enjoying dressing like a woman in "The Finale" and "The Safety." In addition, he dresses like an old woman in "The Lady" to befriend some older women though he did not have to. He admits in the same episode that he feels he is not that good at being a man.

Richard has a similar appearance to his daughter, Anais. They are both pink rabbits, but whilst Anais is very small and slim, Richard is large and overweight. He has long, straight ears, three short, black whiskers on both sides of his face, and unusually long eyelashes similar to Darwin's. It was revealed in "The Stars" that Richard is bald, despite the fact he is completely covered in fur.

Even though he is unemployed, Richard is almost always seen wearing a work uniform, which consists of a long-sleeved, buttoned-up white polo shirt, light brown pants and a dark grey clip-on tie. His lower torso is big enough to cast a shadow on the upper area of his leg. As his wife and son do, Richard goes around barefoot, although when he is in his sleepwear, he wears brown slippers. He also wears a brown sleep robe. He occasionally wears light blue pajamas.

In Season 2, his appearance changes slightly. The shadow under his belly becomes much lighter, his eyes and overall body become a little rounder, and like Anais, his ears are shorter than they were in Season 1.

From Season 3 to now, Richard's eyes are permanently round like the rest of his family. However, he can sometimes be seen with his regular oval eyes. In "The Kids," it is revealed that Richard has ice blue eyes. He mentions in "The Cycle" that he is balding, and paints the bald spots pink to hide them.

As a young adult, Richard wore an outfit based on the grunge fashion of the 1990's. This outfit consists of a red-and-black plaid shirt with white sleeves, a black t-shirt with a yellow smiley face on it (referencing the Nirvana smiley face T-shirt), and ripped blue-gray jeans. He also had stubble on his upper lip and chin.

As seen in "The Choices," in his early adolescence, Richard had freckles, and wore a yellow jacket over a green sweatshirt, with blue jeans and a red and white hat with a blue heart on the front. During what was likely his middle school years, he wore a backward red-and-black baseball cap, a white T-shirt with the word "SK8" printed in red over a black design, a black long-sleeved undershirt, woodland camouflage pants, and black-and-white sneakers. He also had braces and had begun to develop stubble.

In his later teenage years, as also seen in "The Choices" and in "The Cycle," he had acne and, like his early adult self, black stubble on his chin and upper lip. His outfit is basically a restyle of the outfit he would wear in his early adult years. He wore a black t-shirt with what resembles the Snaggletooth logo from the metal band Motörhead. His blue jeans were less ripped, and the red flannel shirt was tied around his waist. He also seemed to have a gold earring in his right ear.

Richard loves his son, mainly because he can relate to him in many ways. He often teaches him odd ways to deal with bullies, and treats him more as a brother or a close friend than a son. Despite his questionable parenting, he still clearly loves Gumball, and does hurt when Gumball insults him.

Richard cares greatly for Darwin. In "The Goons" he lets it slip that Darwin is apparently his favorite of his children. He then immediately tries to cover this up by saying he is simply his "favorite fish".

Richard loves Anais of course, but often butts heads with her intellect. On the advent of Anais attempting to be dumb for a day, she replaced Gumball from the dumb trio, thus becoming Richard's second favorite child. Despite Anais having to clear things up or voice her opinions Richard was willing to even get a job to help his "little girl".

Richard loves his wife, just as much as he fears her. He did not have much courage when they were younger so obviously Nicole pulled most of the moves. But he still loves his wife, mainly because she was one of the only people who approved of him. He even admits in "The Fury" that his wife could do better than him and this is restated by Gumball in "The Lady" where Gumball says Richard feels Nicole is out of his league. He even refers to her as his queen in "The Routine." He is shown to desire her approval as well, as shown in "The Deal" where he works hard to get her to recognize his eforts as a stay at home dad. Their relationship and how it developed was shown in "The Choices" where he met Nicole on her way to a karate tournament. She helped him out of a log he was stuck in, making her late for the tournament. As Nicole becomes disenheartened, he asks why she feels she needs to go. When she says she wants to win and get people to like her, he answers there are already people who like her and then blush. The two subsequently date in their teen and adult years and Richard ends up being kicked out of his house by his mother because of their relationship. The two subsequently moved to a small apartment. When Nicole became pregnant, the two married leading to their current lifestyle.

Obviously, Richard loves his mother very much. Though in "The Kiss" he and Nicole flee from her at first, in "The Man" he with his whole family celebrate her 63rd birthday with her. He even describes how amazing she is alphabetically. In the same episode, he is shown to be very protective and attached to her, forbidding her from seeing her boyfriend, Louie. Richard revealed that he did this because his father had left them. He was afraid that his mother would like Louie more than him and he would lose her too. In response to this, his mother comforts him and shows that she cares about him too.

Richard has not interacted much with Louie before the events of "The Man." But when he does in the mentioned episode, he establishes a major relationship with him. At first though, Richard was afraid that his mother would like Louie better than him and because of this, he treated Louie unpleasantly. After a man-off, Richard stops his mean treatment, and even accepts Louie as his dad.

Richard's biological father left him and his mother when he was young, for unknown reasons. After Frankie finally returns, he scams Richard into giving him possession of his house. Eventually, he regrets having hurt Richard and his family. While Granny Jojo may not think so favorably of Frankie, Richard still loves him, and he even asks him to reunite with him.

Richard has shown much confrontation with Mr. Robinson in the show. In "The Poltergeist" when Gaylord cut his two dollar clip-on tie, and in "The Wand" when Richard fought him using Wanda. The most important role was in "The Tag" when they fought over a trash can throughout the episode.

"I'll be honest with ya, I broke 5 ribs, but it was all worth it, just to see your faces!"

"I'll do it for you, my little girl! ...And I need that key to the executive washroom."

"Apocalypse, Apocla-tips -- it's all the same, smarty pants!"

"It's only funny when it happens to someone else!"

"Well, none of this would have happened if it wasn't for you! [points at a broken computer]"

"What? So you mean the president didn't really need my cape?"

"Watch your language, young man! Cheese is not to be invoked in vain in this house!"

"Oh, yeah, I have no idea how that happened. It was wet when I put it in."

"I have invented the sausage pen! Everything it writes is delicious."

"First he takes my sausages, and then what? Should I let him take my wife? A man's house is his castle, Nicole. And this is a castle, and I'm not letting him ruin it. There's a phantom in our bed, ...A giant earwig! And the next thing you know, he'll come for the kids -- the kids!" 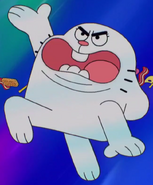 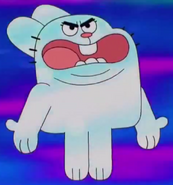 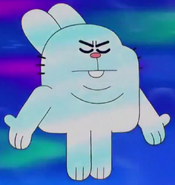 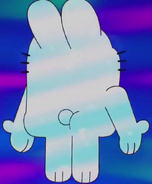 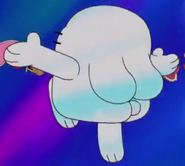 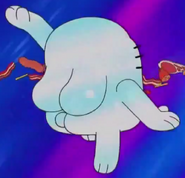 Retrieved from "https://warnerbros.fandom.com/wiki/Richard_Watterson?oldid=103636"
Community content is available under CC-BY-SA unless otherwise noted.