Powerpuff Girls Z (Japanese: 出ましたっ!パワパフガールズZ Hepburn: Demashita! Pawapafu Gāruzu Zetto, lit. They're Here! Powerpuff Girls Z) is a Japanese magical girl anime series directed by Megumu Ishiguro, based on the American animated television series The Powerpuff Girls. The anime is co-produced by Cartoon Network Japan and Aniplex and was animated and produced by Toei Animation, featuring character design by Miho Shimogasa who is also the character designer of Cutie Honey Flash and Ultra Maniac and one of the animation directors of the Sailor Moon original anime franchise. As production occurred in Tokyo, Japan, Craig McCracken who is the original creator of The Powerpuff Girls was not directly involved with the project.

The 52-episode series aired in Japan on TV Tokyo between July 1, 2006, and June 30, 2007. It also aired on AT-X and on Cartoon Network in Japan. The series was dubbed and produced by Ocean Productions in Vancouver, British Columbia, Canada where as such, none of the voice actors for the original The Powerpuff Girls are present in the dub with most of the Canadian voice cast doing imitations of the original voice cast and it was aired on Cartoon Network Philippines and Boomerang (Australia and New Zealand) in 2008. A manga of the same name by Shiho Komiyuno ran in Shueisha's Ribon magazine between July 2006 and June 2007.

The series takes place in Tokyo City, where Professor Utonium and his son, Ken Kitzawa and Ken's robotic dog Peach were busy on Chemical X, a powerful substance but when they have tea, Peach accidentally drop a daifuku to a vat of Chemical X and it magically transforms to Chemical Z, a new form of the original powerful substance. However, the impact of Chemical Z causes climate change where several countries around the world having an instant weather calamity so Ken uses a beam ray attached to Chemical Z and blasts Chemical Z on one of the main icebergs in the bay of Tokyo City and the impact of Chemical Z from the iceberg causes several black and white rays of light to appear in the skies above Tokyo City where three ordinary girls, Momoko Akazutsumi, Miyako Gōtokuji, and Kaoru Matsubara, are engulfed in white lights and become Hyper Blossom, Rolling Bubbles, and Powered Buttercup, the heroines of justice, respectively. However, the numerous mysterious black lights cause others to turn to the side of evil and transforms them into monsters, so the Powerpuff Girls Z must use their weapons like a red yo-yo, a silver bubble rod and a yellow and green hammer to protect Tokyo City from monsters such as Mojo Jojo, Him, Fuzzy Lumpkins and other monsters.

The series uses four pieces of theme music, two opening themes and four ending themes. In the English dub, an original song is used for the opening theme whilst the end credits used shortened and slightly sped up versions of the Japanese opening and ending themes. The official soundtrack was released in Japan on June 27, 2007. The soundtrack consists of TV size versions of most of the series theme songs, the series score by composers Taichi Master and Hiroshi Nakamura presented in the form of a party mix and character songs performed by Emiri Katō, Nami Miyahara and Machiko Kawana. The album's booklet features concept art for all the characters.

A manga adaptation was illustrated by Shiho Komiyuno, was published in Shueisha's Ribon magazine between July 2006 and June 2007 and it features original characters in the manga like for example, a pair of androids by the name of Alpha and Beta who appear as the main antagonists and a popular kid in school by the name of Natsuki Urawa who Momoko has a heavy crush on.

A video game entitled Game de Demashita! Powerpuff Girls Z (ゲームで出ましたっ！ パワパフ ガールズ Z Gēmu de Demashita! Pawāpafu Gāruzu Zetto) was developed by Infinity and published by Bandai for the Nintendo DS on June 12, 2007. It has board-game style gameplay similar to Mario Party and features Hyper Blossom, Rolling Bubbles and Powered Buttercup competing with Mojo Jojo to get to the center of the board, competing in minigames along the way. 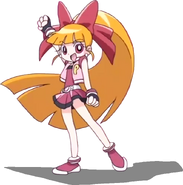 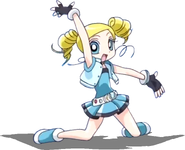 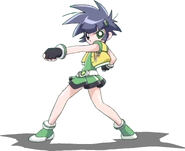 Retrieved from "https://warnerbros.fandom.com/wiki/Powerpuff_Girls_Z?oldid=107256"
Community content is available under CC-BY-SA unless otherwise noted.