It
It: Chapter Two

Bullying other kids, tormenting Bill Denbrough and his friends

Gets devoured by Pennywise while searching the sewers for Ben

Patrick Hockstetter is a member of Henry Bowers' gang in the 2017 horror film, It.

In the book Patrick is a physcopath who murders his baby brother and animals for fun. He took sexual enjoyment for his actions and believed himself to be the only real person in the universe. Despite his low grades in behavior, in reality, He was very intelligent and was also implied to be bi having a tendency to fondle girls while also jerking. He ray off and offering him oral sex.

In the film his physcopathic and murderous tendencies are toned down with his worst act being shooting a flamethrower over Ben with more intention to scare him than actually burn him and while he did enjoy Henry cutting Ben and licks his lips when Richie walked by him in school, he is not shown to be bi nor get sexually aroused seeing others in pain.

He first appears with Henry, Victor, and Belch as they watch the Losers walk by them in school as Patrick licks his lips. Once outside he takes Stan’s kappa and throws it into a moving school bus before the gang gets in Belch’s car and drive off.

He is present with the gang yet does not assist in harrassing Mike in an alley.

When the gang bully Ben he holds Ben so the others can mess with him before intimidating Ben with a flamethrower. He gets excited when Henry starts cutting Ben but Ben escapes and the gang jump over the Kissing Bridge after him. Patrick and Belch chase him. Patrick sends Belch down one way before he looks for Ben. He enters the sewers looking for Ben but encounters dead kids; he tries to flee, but gets cornered and killed by IT.

He later appears on a missing poster and his voice is used by IT to torment Beverly. He is mentioned by Belch in a deleted scene when he informs Henry he ran into Patrick's dad who still hasn't heard a thing about Patrick's disapperance to which Henry replies he doesn't care.

Patrick is later seen among a group of children surrounding Pennywise after Henry kills his father at their encouragement.

Patrick makes a cameo appearance in the second film as a corpse-like version of himself to help the older Henry escape from Juniper Hill State Correctional Facility in Belch's old Trans-Am car, and then becomes Henry's driver, right up until his death at the hands of Richie.

He is not shown interacting with Belch much but Patrick does tell him where to go look for Ben and Belch he is the only member of the gang to be concerned about .Patrick after his disapperance shown by him mentioning Patrick to Henry in a deleted scene.

They are not shown directly interacting but Henry dismisses any concern about Patrick's disappearance in a deleted scene saying he doesn't care, but he likely said that out of anger from being beaten by his father than his actual feelings. 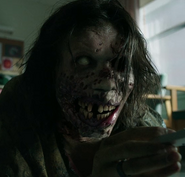 Retrieved from "https://warnerbros.fandom.com/wiki/Patrick_Hockstetter?oldid=118058"
Community content is available under CC-BY-SA unless otherwise noted.