He gets arrested by the Police.

"Halliday, this is how you plan to resolve the fate of the worlds most important economic resource."

Nolan Sorrento is the head of Innovative Online Industries and the main antagonist of Ready Player One. His objective is to find Halliday's Easter Egg by any means necessary so that he may take over and monetize the OASIS.

Sorrento is head of IOI's Oology (the science of searching for Halliday's Easter egg) Division, and serves as the primary antagonist of the novel; his employee number ID is IOI-655321. In the book, he is described as having blonde hair and a hawkish nose.

Sorrento is a cold, ruthless, manipulative, and calculating individual with a bare minimal regard of human life. He will employ underhanded or even illegal tactics to ensure that he (or any one of his employees under his command) gains control of the OASIS.

Along with blocking access to areas where keys and gates are located, as well as using rigged visors to switch control to another user or feed him information when he cannot solve a puzzle or complete a task, Sorrento will even plan and authorize the murders of any people who come closer to finding the egg than he does, as shown with the failed attempt at Wade's life and the successful attempt at Daito's life.

Nolan Sorrento gained a PhD in video game designing, and created some games in the OASIS. At some point in his life, Innovative Online Industries, a communications company and internet provider, offered him a job in the Oology department. His knowledge of video games and James Halliday (the OASIS's designer) got him promoted to head of operations by the time Ready Player One takes place.

Sorrento writes a business letter to a Gunter (egg-hunter) named Parzival. When Parzival meets him in the chat room of the IOI Building in the OASIS, he offers to pay him to reveal the location of the Copper Key. After Parzival refuses, he reveals his real name: Wade Owen Watts. He threatens to murder Wade unless he tells him the location of the Copper Key and the First Gate. Wade, who was at his secret hideout at the time, bravely refused, and Sorrento blew up Wade's old trailer homes (it is possible that Sorrento was unwilling to murder all those people, as a full minute passed without any explosion occurring, and that he was forced to do it by the IOI Board).

Sorrento orders the death of Daito and is tried for it at the end of the book. Sorrento also tried to kill Wade by detonating a bomb under his aunt's trailer in the stacks, killing everyone in that stack- including Mrs. Gilmore, an elderly woman who was one of Wade's only friends. Though he works for IOI, it is revealed that Sorrento took the job only for the opportunity to destroy the entire OASIS (as revealed in Lacero) to "avenge" his sister and force people to face the world they've been neglecting.

At the end of the book, Sorrento and his employees are arrested by federal officers for killing Daito and trying to kill Wade. In the film, it has been recently revealed that Sorrento was arrested, as in the book.

“Sorrento: With all that's going on in the world, do you really think that anyone's gonna give a damn about an explosion in some ghetto trash rat warren in Columbus?

Parzival: (stammers) Sorrento, don't do this. I'm not even there! Sorrento: Not for long.”

Sorrento shows remorse for his actions. 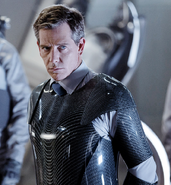 Sorrento's (and F'Nale's) defeat and arrest.
Add a photo to this gallery

Retrieved from "https://warnerbros.fandom.com/wiki/Nolan_Sorrento?oldid=90941"
Community content is available under CC-BY-SA unless otherwise noted.