Subsidiary and label of Warner Bros.

New Line Film Productions Inc., often simply referred to as New Line Cinema, is an American film production label of Warner Bros. Entertainment that was founded in 1967 by Robert Shaye as a film distribution company, later becoming an independent film studio. It became a subsidiary of the Turner Broadcasting System in 1994 before Turner merged with Time Warner in 1996, and was later merged with its larger sister studio Warner Bros. Entertainment in 2008. Currently, its films are distributed by Warner Bros.

New Line Cinema was established in 1967 by the then 27-year-old Robert Shaye as a film distribution company, supplying foreign and art films for college campuses in the United States. Shaye operated New Line's offices out of his apartment at 14th Street and Second Avenue in New York City. One of the company's early successes was its distribution of the 1936 anti-cannabis propaganda film Reefer Madness, which became a cult hit on American college campuses in the early 1970s. New Line also released many classic foreign-language films, like Stay As You Are, Immoral Tales and Get Out Your Handkerchiefs (which became the first New Line film to win an Oscar). The studio has also released many of the films of John Waters.

In 1976, New Line secured funding to produce its first full-length feature, Stunts (1977), directed by Mark Lester. Although not considered a critical success, the film performed well commercially on the international market and on television. New Line then produced or co-produced three more films in 1981 and 1983; Alone in the Dark, Xtro and Polyester, directed by John Waters. Polyester was one of the first films to introduce a novelty cinema experience named Odorama, where members of the audience were provided with a set of "scratch and sniff" cards to be scratched and sniffed at specific times during the film, which provided an additional sensory connection to the viewed image.

During its time as an entity separate from Warner Bros., New Line Cinema operated several divisions, including theatrical distribution, marketing and home video. It was also a partner in founding a new distribution company named Picturehouse in 2005. Specializing in independent film, Picturehouse was formed by Bob Berney, who left distributor Newmarket Films, New Line, who folded their Fine Line division into Picturehouse, and HBO Films, a division of HBO and a subsidiary of Time Warner, who was interested in getting into the theatrical film business. However, on May 8, 2008, it was announced that Picturehouse would shut down in the fall of said year. Berney later bought the Picturehouse trademarks from Warner Bros. and relaunched the company in 2013.

South Canterbury Finance invested $30 million in The Lord of the Rings film trilogy, only to have New Line produce accounts showing that the movies did not make a profit, but made "horrendous losses". According to SCF CEO Allan Hubbard: "We found it surprising because it was one of the biggest box office success of all time." (The three films rank 7th, 25th, and 33rd on the list of highest-grossing films.) Fifteen actors sued New Line Cinema in June 2007, claiming that they never received their 5% of revenue from merchandise sold in relation to the film, which contained their likenesses.

Peter Jackson's production company Wingnut Films questioned New Line Cinema's accounting methods, bringing in an outside auditor as allowed by the contract, and eventually sued New Line. New Line executive Robert Shaye took great offense and declared that New Line would never work with Jackson again. Saul Zaentz also had an ongoing dispute with New Line Cinema over profits from The Lord of the Rings films. In December 2007, Variety reported that Zaentz was also suing New Line, alleging that the studio refused to make records available so that he could confirm his profit-participation statements were accurate.

On February 28, 2008, Time Warner's CEO at the time, Jeffrey Bewkes, announced that New Line would be shut down as a separately operated studio. Robert Shaye and Michael Lynne said that they would step down with a letter to their employees. They promised, however, along with Time Warner and Jeffery Bewkes, that the company would continue to operate its financing, producing, marketing and distributing operations of its own films, but would do so as a part of Warner Bros. and be a smaller studio, releasing a smaller number of films than in past years. The box office disappointment of The Golden Compass was largely blamed for the decision, in which New Line spent $180 million on its development, yet it only grossed $70 million in the United States market.

New Line moved from its long-time headquarters on Robertson Boulevard in Los Angeles in June 2014 to Warner Bros.' lot Building 76, formerly used by Legendary Entertainment, a former Warner Bros. film co-financier. The last film released by New Line Cinema as a separate company was the Will Ferrell film Semi-Pro.

As for the company's future, Alan Horn, the Warner Bros. president at the time of the consolidation, stated, "There's no budget number required. They'll be doing about six per year, though the number may go from four to seven; it's not going to be 10." As to content, "New Line will not just be doing genre [...] There's no mandate to make a particular kind of movie."

In the coming years, New Line will release several films based on properties originated at Warner Bros., including a remake of the 1958 musical film Damn Yankees, a film with George Lopez playing the Looney Tunes character Speedy Gonzales, and another film in the National Lampoon's Vacation series.

On October 22, 2016, AT&T reached a deal to buy Time Warner for $108.7 billion. If approved by federal regulators, the merger would bring Time Warner's properties, including New Line Cinema, under the same umbrella as AT&T's telecommunication holdings, including satellite provider DirecTV.

The 1st logo just has the company name in a tall red and black gradient font.

The 2nd logo has a black square spinning out from the camera before being accompanied by 2 filmstrip borders, before the background dims to the blue glow behind the logo as the company name appears in a white serif font.

The 3rd & iconic logo had the logo design redone in CGI and it takes place in a blue spotlight before it dims as the logo is formed.

Since Warner Bros. merged with the company, the logo has the Warner Bros. shield dismantling into pieces, leaving behind the blue part and the byline, and transforming into squares and filmstrip borders that form the New line Cinema logo. 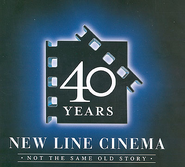