MultiVersus is an upcoming crossover fighting game developed by Player First Games and published by Warner Bros. Interactive Entertainment. The game features various characters within the Warner Bros. catalog. The title is scheduled for release in 2022, for Microsoft Windows, PlayStation 5, Xbox Series X/S, PlayStation 4, and Xbox One.[2]

When an evil entity called the Nothing emerges as a grave danger to the entire Warner Bros. Multiverse, Heroes and villains from across various WB universes are brought together to stop the Nothing and save all reality.

MultiVersus is a platform fighter that uses similar gameplay to Nintendo's Super Smash Bros. series. Players battle on different stages and attempt to knock their opponents outside the boundaries of the arena, with characters being knocked further the more damage they take.[3][4][5] The game is primarily played in a 2-vs-2 format, though 1-vs-1 and free-for-all options are also available.[6]

The game currently features 19 playable characters, with many of them being voiced by actors reprising their roles from previous media. New characters are expected to be announced before and after the game's release.

The game is being developed by Player First Games and is set to release in 2022.[2][4][5] Dedicated servers, rollback netcode, and voice acting have been promoted as prominent features, and the team intend to release new content and characters via constant updates.[6]

Prior to its announcement in November 2021, the existence of Multi-Versus was leaked and rumoured to exist by multiple sources online.[6] Initially, a user on the subreddit r/GamingLeaksandRumours, claiming that the game first came about early 2019 as a result of the release of Super Smash Bros. Ultimate and Warner Bros workers being aware of the "Ultra Instinct Shaggy" internet meme. They had also claimed the idea of a crossover influenced the filming of Space Jam: A New Legacy.[8][9] On October 27, 2021, professional Super Smash Bros. Melee player Juan "Hungrybox" DeBiedma shared a photograph on Twitter containing what he alleged was the character selection screen for an upcoming Warner Bros. platform fighter called MultiVersus.[10] DeBiedma claimed that he had received secret inside information about the game. The image was later deleted after Warner Bros. submitted a DMCA takedown request, which DeBiedma stated was a "hard confirm" of the photograph's veracity.[11][12] The leak included Gandalf from The Lord of the Rings and Rick Sanchez from Rick and Morty as playable characters instead of Arya Stark and Garnet. Superman and Steven Universe’s designs were also updated to be shown in the trailer. Internal game design documents for the game were also leaked on ResetEra.[13][14][15] 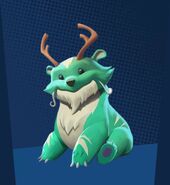