To keep Darla Dimple safe and happy (also responsible for enforcing her will).

Max is the butler and the legal guardian of Darla Dimple and the main antagonist of the 1997 animated Warner Bros. film, Cats Don't Dance. He is Danny's arch-nemesis.

He was voiced by Mark Dindal (the film's director).

Max is truly rude, dishonest, argumentative, and obsequious. He is portrayed as a wicked, arrogant, oppressive, rambunctious, and persuasive manservant. He is very protective and charismatic towards Darla, and is very fond of her. He is completely serendipitous and cooperative for keeping Darla Dimple safe and happy. Max is also very responsible for enforcing her will. Despite his vindictive and acrimonious nature, he is shown to be very quiet, patient, and thoughtful, being a capable piano player. He is also shown to be extremely formidable, destructive, and obstreperous when he likes to torment or crush people.

Max is a colossal ape/gorilla-like manservant who provides the muscle that Darla lacks and is a force to be reckoned with, capable of inhuman strength: in fact for a large part of the film, Max was seen as almost invincible (due to a combination of his strength and his extremely gigantic size) - his arrival caused people to flee in terror and it was clear from his first appearance that he was the tool by which the bratty Darla maintained her power. After Danny accidentally offends Darla during her song, she summons Max to punish Danny as a warning for crossing Darla's path.

As well as providing Darla Dimple with an impressive enforcer, Max also served as her manservant - performing any task she asked of him, he showed surprising and extraordinary gentleness towards Darla and was very fond of her: this loyalty could arguably be a redeeming feature to the otherwise thuggish and aggressive character, but in the end, he was still basically an oppressive bully. Darla didn't really appreciate Max at all and often treated him badly (though Darla treated everyone badly, unless doing so would endanger her status as a celebrity).

Max was defeated near the end of the film when he was tricked into climbing a giant balloon (shaped like Darla) during the opening of a stage show while trying to kill Danny - when Danny sends Max away at the end of the film by popping the balloon on a spike to send it and him flying into the distance, much to his horror. After Darla is exposed of her true colors and sent through a trapdoor as punishment, she calls out for Max, but he can only cry out "Oui, Miss Dimple!", as he is still flying over Paris on the popped balloon. It is unknown whether if he ever got down from the balloon or not. 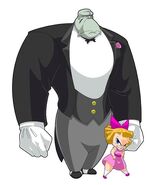