Lena Waithe (born May 17, 1984) is an American screenwriter, producer, and actress. She is known for co-writing and acting in the Netflix comedy-drama series Master of None. Waithe made history becoming the first African-American woman to win the Primetime Emmy Award for Outstanding Writing for a Comedy Series in 2017 for her work on Master of None. The "Thanksgiving" episode for which she won the Emmy was loosely based on her personal experience coming out to her mother. She is the creator of the Showtime drama series The Chi.

Waithe was born in Chicago, Illinois. Though acting was not originally among Waithe's ambitions, she knew from the age of seven that she wanted to be a television writer, and received strong family support for her writing from her single mother and grandmother: Her parents had divorced when she was three; Waithe's father died when she was fourteen. Waithe and her sister grew up on the South Side of Chicago until Waithe was age twelve, and attended a local, mostly African-American elementary magnet school, Turner-Drew but moved to Evanston and finished middle school at Chute Middle School. She graduated from Evanston Township High School and earned a degree in Cinema and Television Arts from Columbia College Chicago in 2006, praising faculty playwright Michael Fry for his teaching and encouragement. Finding more ways to involve herself in the television and film industry, she also worked at a movie theater as well as the media department of a Blockbuster. She moved to Los Angeles in 2006, supported by a locational transfer of her aforementioned Blockbuster job, to begin pursuing her true ambitions.

Having arrived in Los Angeles, Waithe secured a job as an assistant to the executive producer of Girlfriends, a long running sitcom. Soon after, she landed a minor role in Lisa Kudrow's The Comeback. She later became a writer for the Fox television series Bones, a writer for the 2012 Nickelodeon sitcom How to Rock, and a producer on the 2014 satirical comedy film Dear White People. Waithe wrote and appeared in the YouTube series "Twenties" which was produced by Flavor Unit Entertainment and optioned in 2014 by BET. In addition to writing and directing the short film "Save Me", which was shown at several independent film festivals, Waithe wrote the 2013 web series "Hello Cupid" and the 2011 viral video Shit Black Girls Say.

In 2014, Variety named Waithe as one of its "10 Comedians to Watch". In August 2015, Showtime network commissioned a pilot for an upcoming series, The Chi, written by Waithe and produced by Common, which tells a young urban African-American man's coming-of-age story. As the show's creator, Waithe's goal was to bring her experience growing up on the South Side and experiencing its diversity to craft a story that paints a more nuanced portrait of her hometown than is typically shown. Similarly, Waithe continues to extend her influence to support the African American community in the entertainment industry through her role as co-chair of the Committee of Black Writers at the Writers Guild. Waithe was cast in the Netflix series Master of Noneafter meeting creator and lead actor Aziz Ansariwho, with Alan Yang, had originally written Denise as a straight, white woman with the potential, according to Waithe, to evolve into one of the main character's love interests: "For some reason, [casting director] Allison Jonesthought about me for it, a black gay woman."Ansari and Yang rewrote the script to make the character more like Waithe: "All of us actors play heightened versions of ourselves." She said, "I don't know if we've seen a sly, harem pants-wearing, cool Topshop sweatshirt-wearing, snapback hat-rocking lesbian on TV." She also said, "I know how many women I see out in the world who are very much like myself. We exist. To me, the visibility of it was what was going to be so important and so exciting."

In 2017, Waithe and Ansari won the Primetime Emmy Award for Outstanding Writing for a Comedy Series for the season 2 episode "Thanksgiving". She became the first African-American woman to win an Emmy in that category. Waithe described the episode as based on her coming outexperience as a lesbian. During her Emmy speech, she sent a special message to her LGBTQIA (Lesbian, Gay, Bisexual, Transgender, Queer, Intersex, and Asexual) family discussing how "The things that make us different—those are our superpowers." She ended her speech by recognizing her journey as a minority saying "Thank you for embracing a little Indian boy from South Carolina and a little queer black girl from the South Side of Chicago." Waithe also developed an autobiographical drama series called The Chi. Out Magazine named Waithe the Out100: Artist of the Year on November 8, 2017.

When Waithe is not actively working on writing, acting, or producing, she works to recruit more people of color and queer artists for her film and television projects.

Waithe is openly lesbian. She has been in a relationship with Alana Mayo, a content executive, for three years. They got engaged on Thanksgiving Day 2017.

Waithe described her family as "lazy Christians" and said in 2018, "I'm a huge believer in God, and Jesus Christ, and that God made me and all those things. And I try to just be a good person. I think that is the base of my religion, is to be good, is to be honest."

In August 2018, Waithe made the decision to cut her hair and stated that it made her feel "so free and so happy and so joyful." 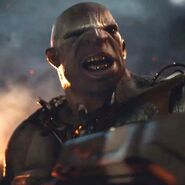 Aech in Ready Player One
Add a photo to this gallery

Retrieved from "https://warnerbros.fandom.com/wiki/Lena_Waithe?oldid=113375"
Community content is available under CC-BY-SA unless otherwise noted.