Larry Joe Bird (born December 7, 1956) is an American former professional basketball player, coach and executive in the National Basketball Association (NBA). Nicknamed "the Hick from French Lick" and "Larry Legend," Bird is widely regarded as one of the greatest basketball players of all time.

Growing up in French Lick, Indiana, he was a local basketball phenom. Highly recruited, he initially signed to play for coach Bobby Knight of the Indiana Hoosiers, but dropped out after one month and returned to French Lick to attend a local community college. The next year he attended the smaller Indiana State University, playing ultimately for three years for the Sycamores. Drafted by the Boston Celtics with the sixth overall pick in the 1978 NBA draft after his second year at Indiana State, Bird elected to stay in college and play one more season. He then led his team to an undefeated regular season in 1978-1979. The season finished with a memorable national championship game matchup against Michigan State, a team that featured Magic Johnson, beginning a career-long rivalry that the two shared for more than a decade.

Bird entered the NBA for the 1979-1980 season, where he made an immediate impact, starting at power forward and leading the Celtics to a 32-win improvement over the previous season before being eliminated from the playoffs in the Conference Finals. He played for the Celtics during his entire professional career (13 seasons), leading them to five NBA finals appearances and three NBA championships. He played most of his career with forward Kevin McHale and center Robert Parish, considered by some to be the greatest front court in NBA history. Bird was a 12-time NBA All-Star, won two NBA Finals MVP awards and received the NBA Most Valuable Player Award three consecutive times (1984–1986), making him the only forward in league history to do so. Bird was also a member of the gold medal-winning 1992 United States men's Olympic basketball team known as "The Dream Team". He was voted to the NBA's 50th Anniversary All-Time Team in 1996, was inducted into the Naismith Memorial Basketball Hall of Fame in 1998, and was inducted into the Hall of Fame again in 2010 as a member of "The Dream Team".

A versatile player at both forward positions, he could play both inside and outside, being one of the first players in the league to take advantage of the newly adopted three-point line. Bird was rated the greatest NBA small forward of all time by Fox Sports in 2016.

After retiring as a player, Bird served as head coach of the Indiana Pacers from 1997 to 2000. He was named NBA Coach of the Year for the 1997–1998 season and later led the Pacers to a berth in the 2000 NBA Finals. In 2003, Bird was named president of basketball operations for the Pacers, holding the position until retiring in 2012. He was named NBA Executive of the Year for the 2012 season. Bird returned to the Pacers as president of basketball operations in 2013 and remained in that role until 2017.

Bird is the only person in NBA history to be named Rookie of the Year, Most Valuable Player, NBA Finals MVP, All-Star MVP, Coach of the Year, and Executive of the Year.

He's also a minor character from the 1996 film Space Jam. He is played by himself.

Larry Bird is seen playing golf with Bill Murray, Michael Jordan, and Stanley Podolak. During Michael Jordan's turn, he gets sucked in he hole, leaving Stan to dig in out; Bird and Murray leave the golf course eventually as Stan continues to keep digging all the way to nightfall.

He is last seen sitting next to Bill Murray watching Michael Jordan playing basketball with the Chicago Bulls at the end of the film. 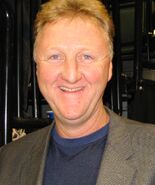