Principal photography on the film began in New Orleans on September 21, 2015, and it premiered at the Toronto International Film Festival on September 9, 2016. It was released by Electric Entertainment and Vertical Entertainment on November 3, 2017.

The story centers around the political upheaval that Vice President Johnson faced when he was thrust into the presidency at the hands of an assassin's bullet in November 1963. With political battles on both sides of the aisle, Johnson works to heal a nation and secure his presidency by passing Kennedy's historic Civil Rights Act. His early years are also chronicled.

A political-historical drama LBJ, written by Joey Hartstone, appeared on the winners of 2014 un-produced Black List screenplays.[16] On June 16, 2015, Woody Harrelson signed on to play the lead role of 36th President Lyndon B. Johnson while Rob Reiner also signed on to direct the film.[4] The film was produced by Acacia Entertainment, Savvy Media Holdings, Castle Rock Entertainment, and Star Thrower Entertainment, and financed by Acacia, Savvy Media.[4] Producers on the film are Matthew George, Reiner, Liz Glotzer, Tim and Trevor White.[4]

The film had its world premiere at the Toronto International Film Festival on September 9, 2016.[19][20] Shortly after, Electric Entertainment and Vertical Entertainment acquired distribution rights to the film.[21][22] It was released on November 3, 2017.[23] It debuted to $1.1 million, finishing 14th at the box office.[24]

On review aggregator website Rotten Tomatoes, the film has an approval rating of 54% based on 71 reviews, with an average rating of 5.7/10. The site's critical consensus reads, "LBJ loses sight of its complicated subject, ignoring the more intriguing aspects of his personality and career in favor of a frustratingly ordinary biopic treatment."[25] On Metacritic, which assigns a normalized rating to reviews, the film has a weighted average score 54 out of 100, based 19 critics, indicating "mixed or average reviews".[26]

David Ehrlich of IndieWire gave the film a C, and said "Harrelson, who has a gift for squeezing charm out of even his most monstrous characters, leans hard into the contradictory notion that Johnson is a power-hungry humanist. The result is a performance that is both wildly ridiculous and appreciably grounded ... Harrelson’s turn seizes on his unique charisma in order to disentangle LBJ from the policies that have defined his legacy."[27]

Harrelson talks to the media before a screening of LBJ, at the LBJ Presidential Library 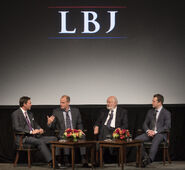