Kevin Sussman is an American actor and comedian, known for starring as Stuart Bloom on The Big Bang Theory, and as Walter in the ABC comedy-dramaUgly Betty.

One of four brothers born to Jewish parents in Staten Island, Kevin Sussman went to the College of Staten Island for one year, then graduated from the American Academy of Dramatic Art in Manhattan, after which, he worked with acting teacher Uta Hagen for four years. 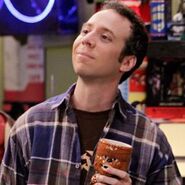 Retrieved from "https://warnerbros.fandom.com/wiki/Kevin_Sussman?oldid=97770"
Community content is available under CC-BY-SA unless otherwise noted.