Kevin Spacey Fowler (or just Kevin Spacey) is an American actor, director, producer, screenwriter, and singer. He is best known for portraying villains in various films, most notably Lex Luthor in the 2006 film Superman Returns, Roger "Verbal" Kint in The Usual Suspects (1995), and Hopper in Disney/Pixar's 1998 film A Bug's Life, although his role as Hopper was actually a voice role that he only took because Robert De Niro declined several times, and nobody else would take the role. Spacey is also known for portraying the deuteragonist Chris Sabian from The Negotiator. Recently in 2017, Kevin Spacey has been charged with allegations of sexual assault, resulting in the suspension of his Netflix original series House of Cards. However, recent reports have confirmed that House of Cards will continue without Spacey, who is currently in rehab. 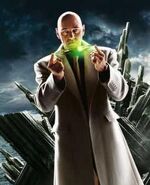 Lex Luthor from Superman Returns (2006)
Add a photo to this gallery
Retrieved from "https://warnerbros.fandom.com/wiki/Kevin_Spacey?oldid=65022"
Community content is available under CC-BY-SA unless otherwise noted.