Jeremy Ray Taylor is an American actor. He is best known for recently portraying Ben Hanscom in the 2017 film, It. He also starred as Sonny Quinn in Goosebumps 2: Haunted Halloween.

Jeremy grew up in Bluff City, Tennessee, the youngest of six children. He is the son of Tracy, a band manager, and Michael Taylor. Jeremy traveled with his mother and developed a stage persona that intrigued his family. At the age of eight, Jeremy was signed to a talent manager and began his acting career. In a video from 2017, Jeremy stated that his real name is Raymond, and uses Jeremy Ray as his stage name after his pen pal wrote a song about him before he passed away.

In 2016, Jeremy was cast as one of the leads, Ben Hanscom, in the upcoming 2017 horror film, It, along with Jaeden Lieberher, Sophia Lillis, Finn Wolfhard, Wyatt Oleff, Jack Dylan Grazer, and Chosen Jacobs. He also appears in flashbacks as the younger Ben Hanscom in the upcoming film, It: Chapter Two, while the older Ben is portrayed by Jay Ryan. 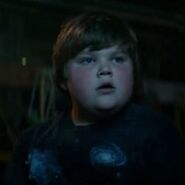 Ben Hanscom
It
Add a photo to this gallery

Retrieved from "https://warnerbros.fandom.com/wiki/Jeremy_Ray_Taylor?oldid=83368"
Community content is available under CC-BY-SA unless otherwise noted.