Dolby Digital 5.1
Jellystone! is an American animated streaming television series developed by C. H. Greenblatt, his third series after creating Cartoon Network's Chowder and Nickelodeon's Harvey Beaks, and produced by Warner Bros. Animation, based on various characters by Hanna-Barbera. It premiered on HBO Max on July 29, 2021.

Jellystone! is the first official series to feature Yogi Bear (and other characters from The Ruff and Reddy Show, The Huckleberry Hound Show, The Quick Draw McGraw Show, The Yogi Bear Show, The Peter Potamus Show, The Atom Ant/Secret Squirrel Show, The Wally Gator Show and The Magilla Gorilla Show) since its 1991 predecessor Yo Yogi!, and the first production since the closure of the Hanna-Barbera studio and the deaths of both William Hanna and Joseph Barbera, who died in 2001 and 2006, respectively.

Production on the series according to Greenblatt began in January 2020, with Unikitty! director Careen Ingle and former Harvey Beaks writer and storyboard artist Hannah Ayoubi. According to Greenblatt's Tumblr, this show has been in early development for at least a year and a half. Greenblatt will also serve as executive producer alongside Hi Hi Puffy AmiYumi creator and Warner Bros. Animation president Sam Register.

In a July 2020 interview with Animation Magazine, Greenblatt stated that they had just outsourced to their animation departments and that the show could debut in 2021. 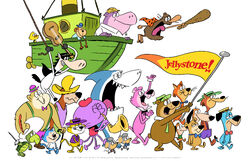 Jeff Bergman says that he is voicing Yogi Bear amongst others for the series.

It was animated with Adobe Animate Snipple Animation in the Philippines.

In June 2021, Jeff Bergman says production on the first season has been completed.[1]