Jackson Robert Scott is a young American actor, famous for his role as the hapless Georgie Denbrough in the 2017 horror film, It, and will reprise the role in the sequel, It: Chapter Two, although he will only appear in flashbacks due to his character's death in the first film. 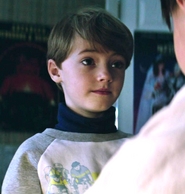 Georgie Denbrough
It
Add a photo to this gallery

Retrieved from "https://warnerbros.fandom.com/wiki/Jackson_Robert_Scott?oldid=87091"
Community content is available under CC-BY-SA unless otherwise noted.