Jack Nicholson (born April 22, 1937) is an American actor, film director, producer, and writer. He is known for playing a wide range of starring or supporting roles, including satirical comedy, romance and dark portrayals of excitable and psychopathic characters. In many of his films, he has played the "eternal outsider, the sardonic drifter", and someone who rebels against the social structure.

He is best known for his roles as Jack Torrance in the 1980 psychological horror film The Shining, Jack Napier/The Joker in Tim Burton's 1989 superhero film Batman, US President James Dale in Burton's Mars Attacks! and as Francis "Frank" Costello in the 2006 crime thriller film The Departed. 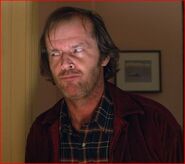 Jack Torrance from The Shining

The Joker from Tim Burton's Batman

Danforth Drake (was Jack Nicholson, Donald Duck and Mr. Winkie)
Add a photo to this gallery

Retrieved from "https://warnerbros.fandom.com/wiki/Jack_Nicholson?oldid=106455"
Community content is available under CC-BY-SA unless otherwise noted.