Jack Dylan Grazer is an American actor. He rose to prominence for his recent portrayal of Eddie Kaspbrak in It.

Jack Dylan Grazer was born on September 3, 2003, in Los Angeles, California to Angela LaFever and Gavin Grazer. When he was a kid, He loved skateboarding, creative/script writing, shooting films with his friends, boogie boarding, and surfing. When he growed up, He becamed a actress, and played Eddie Kaspbrak in It and It Chapter Two. He also played Freddy Freeman in Shazam! 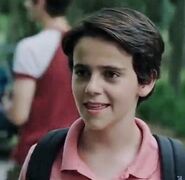 Eddie Kaspbrak
It
Add a photo to this gallery
Retrieved from "https://warnerbros.fandom.com/wiki/Jack_Dylan_Grazer?oldid=100633"
Community content is available under CC-BY-SA unless otherwise noted.