For the 2011 animated 3D short please see I Tawt I Taw a Puddy Tat.

I Tawt I Taw A Puddy Tat

I Tawt I Taw A Puddy Tat is a novelty song composed and written by Alan Livingston, Billy May and Warren Foster.[1] It was sung by Mel Blanc, who provided the voice of the bird, Tweety and of his nemesis Sylvester.[2]

The lyrics depict the basic formula of the Tweety-Sylvester cartoons released by Warner Bros. throughout the late 1940s into the early 1960s: Tweety wanting to live a contented life, only to be harassed by Sylvester (who is looking to eat the canary), and Tweety's mistress shooing the cat away. Toward the end of the song, the two perform a duet, with Tweety coaxing Sylvester into singing with him after promising that his (Tweety's) mistress won't chase him (Sylvester) away.

"I Tawt I Taw A Puddy Tat" reached No. 9 on the Billboard pop chart during a seven-week chart run in February and March 1951, and sold more than 2 million records.[3]

The song was covered by Helen Kane between 1950–51 with Jimmy Carroll & His Orchestra. 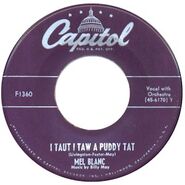 Retrieved from "https://warnerbros.fandom.com/wiki/I_Tawt_I_Taw_A_Puddy_Tat_(song)?oldid=20394"
Community content is available under CC-BY-SA unless otherwise noted.