Hold the Lion, Please
Bugs Bunny Nips the Nips
Hare Splitter
Bewitched Bunny (cameo; even though Witch Hazel is transformed into her)

Honey Bunny is the precursor to Lola Bunny and a female rabbit designed by Robert McKimson, she is Bugs Bunny's first girlfriend who appeared in comics and was used for merchandising purposes beginning in the late 1960s.

The 1942 cartoon, "Hold the Lion, Please", depicts Bugs married to a female rabbit (credited as Mrs. Bugs Bunny) who looks identical to him except for a bow in her hair and a yellow dress. She tells the audience that she wears the (literal) pants in the family. This character has not been seen since. Throughout the years, other female rabbits shown attraction to Bugs Bunny, including a female rabbit in a Hawaiian outfit in the 1944 cartoon "Bugs Bunny Nips the Nips", a shapely robotic female rabbit used as a bait for Bugs by Gossamer's creator in the 1946 cartoon "Hair-Raising Hare", Daisy Lou (who bears a strong resemblance to Honey Bunny's eventual character design from the 1970s-1990s) in the 1948 cartoon "Hare Splitter", Witch Hazel (who is transformed into an attractive female rabbit) in the 1954 cartoon "Bewitched Bunny", and Millicent (an overweight rabbit) in the 1957 cartoon "Rabbit Romeo". Mama Bear (in "Bugs Bunny and the Three Bears"), Penelope Pussycat (in "Carrotblanca"), and Elmer Fudd (in "Bugs' Bonnets" and "Rabbit of Seville") have also shown attraction to him. From 1947 until 1955, in Looney Tunes & Merry Melodies Comics and Bugs Bunny Comics, there appeared Lula Belle Bunny, another girlfriend of Bugs Bunny. Her appearances were rare, and in general, her role was similar to Honey's - she was just filling up the fable. No merchandise with Lula Belle was produced. In most comic stories, she was drawn as a female rabbit; however, she has been depicted as having a human face on one occasion. In Bugs Bunny Comics #139, another girl appeared with whom Bugs Bunny fell in love. Bertha Bunny, apart from blonde hair and dressing, looked much like Bugs in drag. She had a speech defect, resulting in pronouncing parrot farm as carrot farm, which made Bugs thinking she owns a carrot farm. The 1996 film Space Jam release introduced a new female rabbit character, Lola Bunny, who almost completely supplanted Honey as both a merchandising figure and Bugs' sweetheart. During the time the movie was in the theaters, and for some time after that, Lola appeared on practically every merchandising item released by Warners or its licensees (whether or not they were tied into the movie).

A prototype version of Honey Bunny first appeared in the Bugs Bunny's Album comic book from 1953. Instead of being portrayed as his love interest, Honey Bunny is a small white rabbit (and famous African explorer) who is his cousin. The more well-known version of Honey Bunny debuted in Bugs Bunny Comic Book #108 (November 1966) and was a semi-regular fixture in the series of Looney Tunes comic books published by Gold Key throughout the 1960s and 1970s, usually co-starring with Bugs Bunny. Their relationship through the comics was somewhat variable at times; while they were often depicted as a dating couple, there were times when their relationship could be decidedly un-romantic and even adversarial if a particular story demanded it. Honey's physical appearance also varied considerably over time. She had yellow or pale tan fur in some appearances and wore a bow between her ears (which were worn down instead of pointing up). She was later drawn to a very "Bugs Bunny-like" model with gray fur that made her look nearly identical to Bugs himself, aside from her female clothing. Eventually, however, Honey was redesigned to a more visibly feminine model. While she still shared Bugs' basic coloration and design, her facial features (primarily her mouth and muzzle) and tail-tuft were made a bit smaller to give them a softer, more delicate appearance, her eyes were made a little larger and drawn with more prominent feminine eyelashes, and her female curves were given a bit more emphasis. This later version, which began appearing in the early 1970s, became the new "official" model and was used frequently in various Looney Tunes merchandise throughout the 1980s and early 1990s.

Animation and other media

Officially, she is considered a member of the Warner Bros. Looney Tunes characters, even though she has never officially appeared in a single animated short; her appearances were limited solely to promotional and ancillary merchandising items. However, a female rabbit with Honey Bunny's yellow character design (who is unnamed in the cartoon but credited as Honey Bunny) makes a cameo appearance in the closing scene of the Bugs Bunny's Thanksgiving Diet animated television special in 1978. She also appeared in The Bugs Bunny Crazy Castle video game in 1989 and the Bugs Bunny's Birthday Ball pinball game in 1990. The most recent mention of Honey was in the book "Looney Tunes: The Official Visual Guide," where Honey is referred to as a former travel companion of Bugs Bunny.

In the mid-1990s, artists working for Warner Bros. started working on Space Jam. In this movie, Honey Bunny was planned to be Bugs Bunny's female counterpart. In early sketches, an athletic female bunny with a bow on her head is seen wearing a dress referring to the United States of America flag. However, some artists commented that she looks too much like Bugs in drag, and they decided to change her look. They probably took an earlier yellow version of Honey Bunny and updated her to a more modern look. Probably from the very beginning, they wanted to change her name as well. Among proposed names, there appeared such ones as Bunni Bunny, Lola Buni, Lola Rabbit, and even Daisy Lou. Eventually, the character was given the name Lola Bunny. 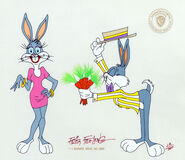 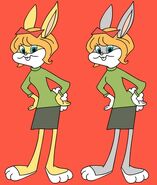