"It's Called Histeria!"
"The Histeria! March"

September 12, 1998 – March 31, 2000
Histeria! is an American animated series created by Tom Ruegger and produced by Warner Bros. Animation. Unlike other animated series produced by Warner Bros. in the 1990s, Histeria! stood out as the most explicitly educational program in order to meet FCC requirements for educational/informational content for children.

Histeria! was aired on Kids' WB from 1998 to 2000, which continued to air reruns until August 30, 2001. It was presented as a Saturday Night Live-style sketch comedy, with its cast often filling the roles of historical figures. It was to be WB's most ambitious project since Animaniacs. Like the aforementioned, 65 episodes were originally going to be made, but due to being $10 million over budget, only 52 episodes were completed before production of the series was canceled in March 2000. Due to the high production costs, some later episodes reused footage from previous episodes, re-timed to match newly recorded audio, as well as several non-educational segments being used as filler.

Unlike its predecessors, Histeria! was oddly never aired in reruns on any cable network. It was, however, streamed on In2TV, first from March to July 2006, and again in October of that year until January 2009. The full series was released on DVD by Warner Archive Collection in July 2016, though it has yet to be added to iTunes or Amazon Video as of August 2020.

Like other animated series produced at the time by the Warner Bros. animation, Histeria! derived most of humor from its slapstick comedy and satire, with the distinction of combining historical figures and events. Episodes would commonly feature a large cast of children and typecast adults in comedic skits and song parodies, e.g. the cause of the American Civil War sung to the tune of The Brady Bunch theme.

Most of the recurring real-life historical figures in Histeria! were portrayed as caricatures of real-life celebrities from the modern era. The intent was to make analogies to contemporary individuals in terms of personalities and attitudes. 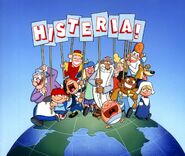