Gary Leonard Oldman (born 21 March 1958) is an English actor, filmmaker, musician and author. Renowned for his "big" acting style, Oldman is one of the most celebrated thespians of his generation, with a diverse career encompassing theatre, film and television. 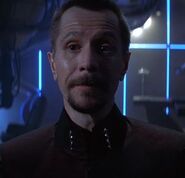 Retrieved from "https://warnerbros.fandom.com/wiki/Gary_Oldman?oldid=46875"
Community content is available under CC-BY-SA unless otherwise noted.