“The only hope for peace, was in a legend of the sword "Excalibur". For it was said that only the true king, can pull this magical sword from this stone, and unite the people.”
―Sir Lionel explaining about the sword back where it all began

The Magic Stone (its main purpose for the true king to pull out),
King Arthur,
Rock Ogre (briefly),
Ruber (after he finally got hold of it)

To beat back enemies (Arthur),
To use as a toothpick (Rock Ogre, briefly),
To kill Arthur and rule Camelot (Ruber, Failed)

Camelot, The Forbidden Forest (After it was stolen)

Excalibur is the most powerful and magical sword pulled by King Arthur from the Magic Stone (because he is the rightful king). The sword is the main object in the film Quest for Camelot and was centered around the film's plot.

Excalibur has an handle in a silhouette shape that consists of a reddish-crimson top half that nearly takes up the handle, a dark crimson bottom half with a gold V shaped line in the middle of the handle, a white circular V-shaped pommel on top of the handle, and a gold base to hold the handle in place. The sword has an gold hilt guard with its ends slightly curved inward and downward, an magical, metallic sword blade with the chappe that consists the gold outer outlines of the three interlock rings with the bluish-silver inside containing dark greyish-blue inner outlines.

The sword has its purplish-grey scabbard with a gold collar, two interlocked rings, and an chape. An brown belt with three gold interlocked rings printed on it, and a buckle, is used to hold Excalibur in place on King Arthur's throne.

When it is melded to Ruber's arm with his potion. The colors on the sword have changed, its handle is enlarged and colored grey with a black pommel (in the same shape) and line, four folds with small silver circles at the end (to represent Ruber's fingers of his fused hand), black hilt, grey blade with an dark grey inside of the black three rings with a black outside outline (though the hilt and the blade are in their normal colors in the comics). After Ruber is disintegrated by the stone and his metallic hand is dismantled, the sword's hilt, blade, and the handle turn back to their normal colors.

Excalibur is a magical sword, generated and created by the stone, The sword stays in the stone, no matter many people try to pull the sword free from the stone. Arthur is the rightful heir and the sword can be drawn from the stone. The sword is so powerful that when Ruber trying to whack the sword with his mace, the sword powerfully rebels the villain by sending him flying. Although, Excalibur is so mighty, then when it got stolen by the Griffin, the sword ends up being held in the wrong hands, the first was the Ogre, then Ruber who immediately bonds the sword to his hand with his potion to stop anyone from taking it from him. But the sword still has magical powers in it, when Ruber plunges Excalibur back into the stone by mistake, The stone and Excalibur's magical powers begin to clash with the potion, where it not only kills Ruber by disintegrating him into oblivion, but purifying Excalibur back to normal where the sword returns back into Arthur's hands.

At the complete darkness of the lands, The magic sword, Excalibur is shown to be sticking out of The Magic Stone in the center of the circle of stones, Many people tried to pull out the sword but they fail and give up. But when Arthur approaches the stone, the three rings glows. Arthur pulls out the sword easily because he is the rightful king. With Excalibur in the hands of Arthur, he led everyone out of the darkness and they all create a kingdom called Camelot.

Arthur leads all the knights inside the castle for a meeting, When Ruber is disappointed with his share of the lands given by Arthur, He nominates himself as king due to his obsession of fame and riches. Sir Lionel berates Ruber swearing that he will not serve a false king, that drove Ruber into a murderous rage, he pulls out his mace under the table and makes a lunge for Arthur but Sir Lionel defends the king and he is killed by Ruber who defeats the other knights easily, But Arthur pulls out Excalibur just in time and rebounded Ruber, hurling him to the end of the room. Ruber then flees from Camelot in exile vowing revenge that he would hold Excalibur and all the kingdom to himself.

10 years later after Sir Lionel's death and Ruber's exile, The Griffin breaks into the round table tower and steals Excalibur (including its scabbard and the belt), Whilst flying over the Forbidden forest, Ayden, Merlin's legendary sliver winged falcon attacks the Griffin causing him to drop the sword in the valley of thorns. One night, a Rock Ogre finds the sword and takes it, leaving behind its belt in the thorns for Kayley, Garrett, Ayden, Devon and Cornwall to find.

The Rock Ogre drops the scabbard of the sword whilst climbing into his cave and using Excalibur as a toothpick, While the Ogre was asleep and with Garrett, Devon and Cornwall's help, Kayley manages to retrieve the sword and they escape the cave before Ruber and his men have the chance to get to it. They group manage to reach the end of the forest with Excalibur, but Garrett decides to stay in the forest, feeling unwanted in Camelot, and handed Kayley Excalibur. After Garrett's departure, Ruber captures Kayley, before taking the sword and finally holds it for the first time. To make sure he can hold it forever, Ruber then fuses Excalibur to his arm with his potion, replacing his whole arm with a mechanical version of it to hold the sword. Ruber then disguises himself in a cloak and uses Lady Juliana to get himself into Camelot. After a fight broke out, Ruber went inside the castle into the round table room and ready to attack Arthur once more.

After many attempts Ruber tries to strike Arthur but misses and strikes the table, Until Kayley slams Ruber with the beam out of the window and straight into the courtyard where the circle of stones and the magic stone was. Ruber then corners Kayley when Garrett tries to strike Ruber with his stick, but Ruber slices it. When Ruber comes in for the kill. Kayley and Garrett trick Ruber by slipping the sword back in the stone. Ruber realizing this, tries to pull it out in panic, but to no avail, because he is not the rightful king. The stone then creates an magical wave that expunges the taint of the potion from the sword, disintegrating Ruber and reverting Excalibur back to its original form. After The stone's magic fades away, the healed King Arthur steps out and draws Excalibur from the stone. With the sword back in the right hands, Arthur knights Kayley and Garrett by tapping Excalibur on their shoulders and officially makes the Knights of the Round table.

A man failing to pull out Excalibur.

Excalibur in its scabbard behind Arthur

Excalibur falling into the forest.

The Belt of the sword hanging on a vine.

Excalibur in a Rock Ogre's hand.

Ruber taking Excalibur and holding it for the first time.

Ruber putting a drop of his acme potion on Excalibur and his hand.

Ruber melding it to his arm.

Ruber, after he finished attaching Excalibur to his arm.

Ruber unable to yank the sword out of the stone.

Arthur pulling Excalibur out of the stone.

The sword back in the right hands of Arthur.

Excalibur as shown, lying on the ground in the film's artwork for posters and covers. 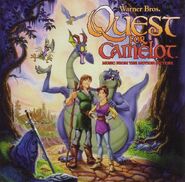 Excalibur propped up against a stone in the film's soundtrack cover.
Add a photo to this gallery

Retrieved from "https://warnerbros.fandom.com/wiki/Excalibur_(Quest_for_Camelot)?oldid=107096"
Community content is available under CC-BY-SA unless otherwise noted.