Edward Harry "Eddie" Deezen (born March 6, 1957) is an American actor, voice actor and comedian best known for his bit parts as nerd characters in 1970s and 1980s films such as Grease, Grease 2, Midnight Madness, 1941 and WarGames, as well as for larger and starring roles in a number of independent cult films, including Surf II: The End of the Trilogy, Mob Boss, I Wanna Hold Your Hand, Beverly Hills Vamp and Teenage Exorcist.

As a voice actor, he is easily recognizable for his distinctively high-pitched and nasal voice, most notably used for the characters of Mandark in the Cartoon Network series Dexter's Laboratory, Snipes the Magpie in Rock-A-Doodle, Ned in Kim Possible and the Know-It-All in The Polar Express. 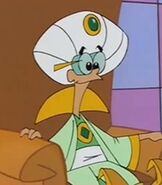 Caliph in Scooby-Doo! in Arabian Nights 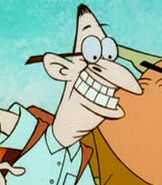 Glasses Boy in Cow and Chicken 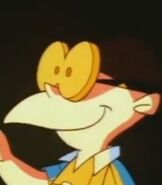 Know-It-All in The Polar Express

Todd in Chowder
Add a photo to this gallery
Retrieved from "https://warnerbros.fandom.com/wiki/Eddie_Deezen?oldid=69429"
Community content is available under CC-BY-SA unless otherwise noted.