February 26, 1995 (pilot)
April 28, 1996 – November 20, 2003
Dexter's Laboratory (commonly abbreviated as Dexter's Lab) is the first Cartoon Cartoon, created by Genndy Tartakovsky, creator of Samurai Jack, for Cartoon Network. The series follows Dexter, a boy-genius with a secret laboratory filled with his inventions. He constantly battles his sister Dee Dee, who always gains access despite his best efforts to keep her out, as well as his arch-rival and neighbor, Mandark. The series' first two seasons contain additional segments: Dial M for Monkey, which focuses on Dexter's pet lab-monkey-turned-superhero, and The Justice Friends, about a trio of superheroes who share an apartment.

Tartakovsky first pitched the series to Hanna-Barbera's animated shorts showcase World Premiere Toons, basing it on student films he produced while attending the California Institute of the Arts. A pilot aired on Cartoon Network in February 1995, and in August viewer approval ratings convinced the network to order a half-hour series, which premiered on April 28, 1996. By 1999, 52 episodes and a television movie had been produced, and Tartakovsky then left the series to begin work on his other projects, Samurai Jack and Star Wars: Clone Wars. In 2001, the network revived the series under a different production team at Cartoon Network Studios, and after 26 more episodes, the series ended on November 20, 2003.

Dexter's Laboratory was inspired by one of Genndy Tartakovsky's drawings of a ballerina. After drawing her tall and thin shape, he decided to pair her with a short and blocky opposite, Dexter. In 1991, Tartakovsky made his first "Dexter" short. On February 20, 1995, Dexter's Laboratory made its first run on What a Cartoon! Show. In March 1996, the first season began airing. Directors and writers on the series included Genndy Tartakovsky, Rumen Petkov, Craig McCracken, Seth MacFarlane, Butch Hartman, Rob Renzetti, Paul Rudish, Mark O'Hare, John McIntyre and Chris Savino.

Dexter's Laboratory ended its initial run in 1999, with the series finale being the episode "Last But Not Beast", but re-entered production in 2001. The new episodes, which ran for two more seasons, had a different production team than the originals, since Genndy Tartakovsky was busy working on Samurai Jack and Star Wars: Clone Wars. The second series featured new character and background designs, alternative storyline and character backgrounds, and different sound effects (which were mostly all classic Hanna-Barbera sound effects). Also, Dexter's voice actress changed from Christine Cavanaugh to Candi Milo.

On November 18, 2001, Cartoon Network aired the 12-hour "Dexter Goes Global" marathon in 96 countries and 12 languages. The marathon featured fan-selected episodes of Dexter's Laboratory and culminated with the premiere of the first two episodes of season 3.

The show was rerun on Cartoon Network during weekday mornings from November 8, 2010 until March 4, 2011. On March 30, 2012, the series returned to Cartoon Network in the United States in reruns on the revived block, Cartoon Planet. The Canadian version of Cartoon Network airs reruns as well, with the series being featured on the channel's launch on July 4, 2012. The launch was commemorated by parent network Teletoon, which aired Cartoon Network-related programming blocks and promotions in the weeks leading up to the event, including episodes of Dexter's Laboratory.

On January 22, 2013, Adult Swim uploaded the never-aired episode Rude Removal. It has since disappeared from Youtube.

The series revolves around a boy genius named Dexter who has a secret laboratory filled with highly advanced equipment that is hidden behind a bookshelf in his bedroom. Access to this seemingly endless laboratory is achieved by speaking various passwords or by activating hidden switches hidden on the bookcase (such as pulling out a specific book). Another mean of lab access is a retinal scanner. Dexter is normally in conflict with his ditzy older sister Dee Dee who has an uncanny talent for gaining access to Dexter's lab despite his best efforts to keep her out. Dee Dee eludes all manner of lab security and once inside, delights in playing in the lab, often destroying many of Dexter's inventions and creations. For reasons left unexplained, Dexter still manages to keep his lab a secret from his clueless, cheerful parents. In the beginning of the series Dee Dee is the only other character who knows about his lab, in several episodes however, he is forced to reveal the lab to his parents, although all of these episodes end with all of his parents memories being wiped. Dexter also has an arch-nemesis, another boy genius named Susan "Mandark" Astronomonov. Mandark often competes with Dexter and tries to outdo him any chance he gets, examples of this include: a school science fair, a soapbox derby, etc. Mandark is also secretly in love with Dee Dee.

A segment that airs between two Dexter's Laboratory segments during the first half of the first season. in the segment Dexter's pet lab monkey (voiced by Frank Welker), who was given superpowers through Dexter's experiments (unbeknownst to Dexter), fights crime as a masked superhero. Monkey is joined by his partner Agent Honeydew (voiced by Kath Soucie), the Commander General (voiced originally by Robert Ridgely and later Earl Boen), and sometimes "The Justice Friends". This is a spoof of DC's comic book Dial H for Hero.

A segment that airs between two Dexter's Laboratory segments during the second half of the first season and one episode of the second season.

The Justice Friends consists of Major Glory, The Infraggable Krunk, and Valhallen, who are all roommates living in an apartment complex called "Muscular Arms". Most of the adventures of The Justice Friends deal with the three trying to balance out their superhero adventures while just trying to keep their composure while living together in the apartment. Most of these adventures play out like a sitcom along with a laugh track, used in a satirical manner. The name derives from the Justice League and the Super Friends.

Dexter's Laboratory broadcast 78 half-hour episodes over 4 seasons during its 7-year run. Two pilot shorts were produced for World Premiere Toons that aired in 1995 and 1996 and were subsequently fused into the series' first season. Fifty-two episodes were produced over the original run from 1996 to 1998, which was followed by the TV movie Ego Trip in 1999.

An additional 26 episodes were produced and broadcast from 2001 to 2003. The short "Chicken Scratch" debuted theatrically with The Powerpuff Girls Movie in 2002 and was later broadcast as a segment in the series' fourth and final season.

Appearances in other media

An elderly Dexter made a non speaking role in the I Am Weasel episode, I Am my Lifetime.

Dexter had various cameos in The Powerpuff Girls. He appearaed in the episodes, Powerpuff Bluff, Ploys R Us, Criss Cross Crisis, and Forced Kin.

A Dexter balloon was featured in the Codename: Kids Next Door episode, Operation U.N.C.O.O.L.

Dexter and Dee Dee's names were featured on list in the Steven Universe episode, Say Uncle.

Dexter appeared in a segment of the Uncle Grandpa episode, Pizza Eve.

Dexter's Laboratory was mentioned in the Craig of the Creek episode, Kelsey the Elder.

The first season was released on DVD in the US on October 2010.

All 4 seasons are availble on iTunes and Amazon Prime. 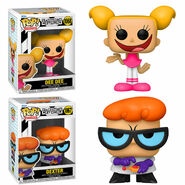