Daisy Buchanan from the 1925 novel The Great Gatsby by F. Scott Fitzgerald

Daisy Fay Buchanan is a fictional character in F. Scott Fitzgerald's magnum opus, The Great Gatsby (1925). In the novel, Daisy is depicted as a married woman with a daughter. She is reunited with her former lover Jay Gatsby, arousing the jealousy of her husband, Tom. She is widely believed to have been based on Ginevra King. She has appeared in various media related to the novel, including feature films and plays.

Daisy Fay was born into a wealthy Louisville family. By 1917, Daisy had several suitors of her same class but fell in love with Jay Gatsby, a poor soldier. Before Gatsby left for war, Daisy promised to wait for him. After Gatsby started attending Trinity College, Oxford, Daisy sent him a letter revealing that she had married Tom Buchanan. During the marriage, Daisy gave birth to Pammy, who Daisy had hoped would be "a beautiful little fool." Daisy and her family settled in East Egg, a wealthy old-money enclave on Long Island.

After her cousin Nick Carraway arrives in West Egg, the neighboring island, he meets Gatsby, who has become extremely wealthy. Gatsby throws several large, extravagant parties in hopes that Daisy will attend. Nick successfully sets up a meeting between Daisy and Jay at his neighboring cottage in West Egg, where the two meet for the first time in five years, which leads to an affair.

At the Buchanan home, Daisy, Tom, Gatsby, Nick, and his girlfriend Jordan Baker decide to visit New York City, Tom taking Gatsby's yellow Rolls Royce with Jordan and Nick while Daisy and Gatsby drive alone. Once the group reaches the city, they throw a party that turns into a confrontation between Daisy, Tom, and Gatsby. Though Gatsby insisted that Daisy never loved Tom, Daisy admits that she loves both Tom and Gatsby. The party ends with Daisy driving Gatsby out of New York City in Gatsby's car, while Tom leaves with Nick and Jordan. Tom's mistress Myrtle Wilson, who earlier had a falling out with Tom, runs in front of Gatsby's car in hopes of reconciling with Tom. Daisy does not see her until it is too late and runs her over. Daisy, panicked, drives away from the scene of the accident. In her home in East Egg, Gatsby assures her that he will take the blame. Tom tells George, Myrtle's husband, that it was Gatsby that killed Myrtle. George goes to Gatsby's home in West Egg and shoots Gatsby dead before turning the gun on himself. After Gatsby's murder, Daisy, Tom, and their daughter leave East Egg, having no forwarding address. 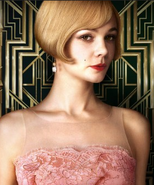