Chocolate frogs are a very popular sweet made from chocolate in the form of a frog. They come with a collectible card of a famous witch or wizard in each pack. The frogs are made of seventy percent Croakoa. Presumably, this substance is what allows them to act like an actual frog.

Chocolate Frogs also come in a white chocolate variety. A popular game for Hogwarts students is to let a bunch of Chocolate Frogs hop around, and to grab the normal ones while avoiding the white ones.

In 1991, a chocolate frog was seen on a table in the Great Hall at the Sorting Ceremony. The same year Hermione Granger gave Harry a large box of Chocolate Frogs for Christmas.

When Harry Potter was in the Hogwarts infirmary after his skirmish with Professor Quirrell and Voldemort in 1992, he received many treats from his friends and admirers. Whilst Harry was unconscious, someone consumed all of the chocolate frogs. During his bedside visit, Dumbledore posited that Ron Weasley had done it, so Harry could have the cards without going through the "trouble" of eating the frogs.

Also, a chocolate frog was useful in fighting off his dementor-boggart when Remus Lupin taught Harry the Patronus Charm.

Chocolate Frog Cards come in Chocolate Frogs candy (along with a chocolate frog). Hogwarts students collect and trade them. The faces on some of the cards are famous even to Muggles, although their magical abilities were not always recognized by the non-magical community.

The Chocolate Frog collectible cards played an important role in Harry, Ron, and Hermione's first year at Hogwarts, as Dumbledore's card enabled them to ascertain the identity of Nicolas Flamel. 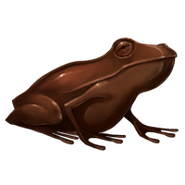 Retrieved from "https://warnerbros.fandom.com/wiki/Chocolate_Frog?oldid=73150"
Community content is available under CC-BY-SA unless otherwise noted.