Candice Anne Rose "Candi" Milo is an American voice actress and singer. She has voiced various characters in many animated series, such as Dexter in Cartoon Network's Dexter's Laboratory, Ophelia Ramírez, Madame Foster, Cheese, and others in The Life and Times of Juniper Lee and Foster's Home for Imaginary Friends, and Snap and Nora Wakeman in Nickelodeon's Chalkzone, Mom in Cartoon Network's Cow and Chicken and My Life as a Teenage Robot, respectively. 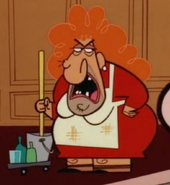