Robert Emerson "Bob" Clampett (May 8, 1913 - May 2, 1984) was an American director, producer, animator, and puppeteer, best known for his work with both of Warner Bros.' cartoon series, Looney Tunes and Merrie Melodies.

Clampett was born in San Diego, California on May 8, 1913 to Joan and Robert Clampett. When he was a toddler, he and his family moved to Hollywood where they lived next door to actor Charlie Chaplin and his brother Syd. While growing up in Hollywood, Clampett was interested in and influenced by actors Douglas Fairbanks, Lon Chaney, Charlie Chaplin, Buster Keaton and Harold Lloyd. At the ages of four and five, Clampett showed extraordinary drawing talent which led to him wanting to do art, but decided to step up to cartooning and make comic strips. At the age of twelve, Clampett had his cartoons published by the Los Angeles Times including a full-page comic about the nocturnal adventures of a pussycat that was published in color in the Sunday edition. Later on, Clampett showed an interest in animation, filmmaking and puppetry. He also began making his own short films subjects in his garage.

Despite his legacy, Bob has been savaged by his coworkers at Warner Brothers, many of whom called him a "shameless self-promoter who provoked the wrath of [his] former [coworkers in later years] for allegedly claiming credit for ideas which were not [his]." Chuck Jones particularly disliked him, and therefore made no mention of him in his 1979 compilation-film The Bugs Bunny Road-Runner Movie, or his biography Chuck Amuck. In addition, voice-actor Mel Blanc accused Bob of being an "egotist who took credit for everything." Some of this antipathy may have been connected to Bob's "golden boy" status at the studio (his mother was said to be a close friend of producer Leon Schlesinger), which allowed him to ignore rules that everyone else was expected to follow. He also mentioned many things that were not true, in Bugs Bunny Superstar. 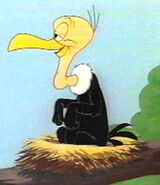