Looney Tunes: Back in Action

Blacque Jacque Shellacque is a fictional cartoon character in the Looney Tunes cartoons. He was created by Robert McKimson and first appeared in the 1959 short Bonanza Bunny.

While similar in many ways to Yosemite Sam—both are short in stature and temper—Blacque Jacque possesses his own unique characteristics, not the least of which is his comically thick French Canadian accent, performed by Mel Blanc. Also, like Yosemite Sam and many other villains, Blacque Jacque Shellacque does not have a high level of intelligence, preferring to use force instead of strategy to fight Bugs.

Blacque Jacque first appeared in Bonanza Bunny, which takes place in the middle of the Klondike gold rush. Blacque Jacque attempts to seize Bugs' bag of gold (actually "a bunch of rocks and some yellow paint," according to Bugs) through card cheating, trickery, and out-and-out threats, but Bugs outwits him as always and defeats him by replacing his bag of gold with gunpowder while poking a hole in the bag and tossing a lit match on it causing a massive explosion.

Blacque Jacque later clashed with Bugs in 1962's Wet Hare, in which his illegal damming of a river ("Me feel like pezky little beav-aire!") brings him into conflict with the rabbit—not only because he is committing a crime, but because he has blocked off the waterfall that Bugs uses as a shower. After demolishing several of Blacque Jacque's dams, Bugs turns the tables by damming the river upstream of Jacque's dam. Jacque, unsurprisingly, is enraged and wheels a small cannon along the riverbed to destroy Bugs' dam—but when he does he only reveals another dam further upstream. Jacque blows up several of Bugs' dams in succession and finally follows Bugs all the way to the "Grand Cooler Dam" (a pun on the name of the Grand Coulee Dam). Jacques tries to blow it up with his cannon, but the dam is so massive and thick that the cannonball he launches ricochets back into the cannon's barrel and the recoiling force lands both Jacque and the cannon into the back of a waiting paddy wagon.

Blacque Jacque Shellacque also does a cameo as a French Soilder in Pepe Le Pew's cartoon in Little Beau Pepe.

Recently (2013) Blaque Jacque made an apperence in "The Looney Tunes Show" Season 2 episode Nineteen, "Ridiculous Journey" as a tracker running after Tweety, Sylvester, and Taz. He is also revealed to be the cousin of Yosemite Sam.

Blacque Jacque is one of the more obscure Looney Tunes characters, but he has his share of fans. Canadian television networks in particular put his shorts in regular rotation (on shows such as The Bugs Bunny and Tweety Show), and the cartoons have an unusual amount of Canadian references for the time period in which they were made (for example, Bugs claims that he received a call from Jacque's girlfriend, "Fifi from Montreal"). In the video game Bugs Bunny: Lost in Time he appears in various levels as an enemy to defeat, he was voiced by Billy West. Although Blacque Jacque did not appear in Looney Tunes: Back in Action, he was featured in the film's video game adaptation stealing paintings from the Louvre and being defeated by Bugs Bunny. Jacque was voiced by Maurice LaMarche. 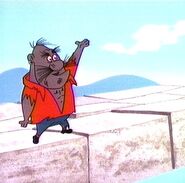 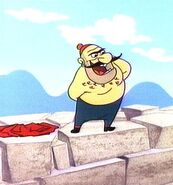 Retrieved from "https://warnerbros.fandom.com/wiki/Blacque_Jacque_Shellacque?oldid=66927"
Community content is available under CC-BY-SA unless otherwise noted.