Big Fat Baby (often abbreviated as BFB) is a character featured on Histeria! He is a sidekick to the central character Father Time, frequently accompanying him as he introduces the sketches. He is a parody of Baby New Year, as he is shown wearing a ribbon dictating the year in which the sketch takes place.

Big Fat Baby is known for the foul odor he carries in his diaper. As a result of this, usually in sketches where the Kid Chorus is annoying a historical figure, one of the kids asks the figure in question to change Big Fat Baby's diaper, pointing out that the last time he had a clean diaper was before something that happened a long time ago. (Given that the cast of Histeria! appears to be time-traveling, it is likely that the last time Big Fat Baby's diaper was changed wasn't quite so long ago from their perspective.)

There appears to be more than one of Big Fat Baby, as at times, several Big Fat Babies appear onscreen at once, usually to depict a certain lengthy time period such as the American Revolution. In fact, there have even been several Big Fat Baby Girls who are differentiated from the males by way of their pink hair bows and sometimes tanned skin. In addition, various historical figures who appeared on Histeria!, such as Alexander the Great, King Henry VIII, and the semi-regular character Nostradamus, are always depicted as Big Fat Babies whenever they are shown in their infanthood. 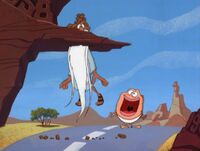 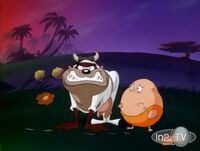 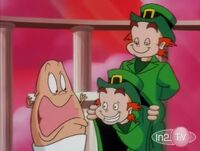 Retrieved from "https://warnerbros.fandom.com/wiki/Big_Fat_Baby?oldid=99573"
Community content is available under CC-BY-SA unless otherwise noted.