Ant Hill Harry, alias "Babyface" Finster, is a Looney Tunes character who debuted in "Baby Buggy Bunny". He was voiced by Mel Blanc. He is a 35-year-old criminal whose physique strongly resembles one of a baby.

In "Baby Buggy Bunny" after robbing a bank, he accidentally loses his money down Bugs Bunny's rabbit hole and pretends to be an orphan baby so he can steal it back.

In The Looney Tunes Show he appears in a criminal record book while Daffy Duck searches for the robber who stole his handbag. 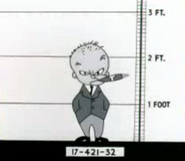 Retrieved from "https://warnerbros.fandom.com/wiki/Babyface_Finster?oldid=86308"
Community content is available under CC-BY-SA unless otherwise noted.