Associated Artists was founded in 1948 by Eliot Hyman. It handled syndication of 500 films, including the Republic Pictures and Robert Lippert libraries, but soon both companies entered television distribution. It also served for Monogram Pictures and Producers Releasing Corporation.[3]

In 1951, Hyman sold the company to David Baird's Lansing Foundation then to a newly started Motion Pictures for Television (MPTV), where Hyman served as a consultant. Hyman also became a partner in Mouline Production, production company on Moby Dick, while financing and producing other films and TV projects.[3]

In 1956, the company was refinanced and its name changed to Associated Artists Productions Corp. (a.a.p.). Lou Chelser's PRM, Inc. closed the purchase of the entire pre-1950 library owned by Warner Bros. Pictures[4] in June 1956 for $21 million with a.a.p. and its theatrical subsidiary Dominant Pictures handling distribution sales.[5]

By December 1957, control of a.a.p. had gone to New York Supreme Court between the parties of a.a.p., National Telefilm Associates, and Harris minority shareholder group.[7][citation needed]

The company was acquired by United Artists (UA) in 1958 with UA borrowing the full amount $27 million from Manufacturers's Trust when a.a.p. shareholders needed cash quickly. The a.a.p. purchased did come with uncollected accounts receivable amount around the purchase price.[8] The resulting division was named United Artists Associated, Inc. (u.a.a.). u.a.a. made a deal to distribute Beany and Cecil internationally. With the twin kids syndicated packages of Looney Tunes/Merrie Melodies and Popeye, u.a.a. took a look at a number of shorts in the a.a.p./pre-1950 WB library that appealed to kids and packaged them in a third group as The Big Mac Show with a cartoon wrap around.[9]

The material a.a.p. bought from Warner Bros. Pictures included all of its features produced and distributed by Warner Bros. prior to 1950 (Warner Bros. retained the rights to two 1949 films it only distributed), and also included was the film Chain Lightning (produced in 1949 and released in 1950). Also included were the live-action short subjects released prior to September 1, 1948.

The cartoon library included every color Looney Tunes and Merrie Melodies short released prior to August 1, 1948, and all of the Merrie Melodies produced by Harman-Ising Pictures from 1931 to 1933, except Lady, Play Your Mandolin! (1931). The remaining black-and-white Merrie Melodies made from 1933 to 1934 and the black-and-white Looney Tunes were already sold to Sunset Productions. Former Warner cartoon director Bob Clampett was hired to catalog the Warner cartoon library. This purchase and the Popeye cartoons gave a.a.p. a library of over 568 theatrical cartoon shorts, which would be staples of children's television for many years.

For the Warner Bros. productions, a.a.p. simply inserted their logo prior to the start of the film. For the Popeye cartoons, a.a.p. removed all logos and mentions of Paramount from the Popeye prints they distributed, since Paramount did not want to be associated with television at the time. The ending result was that new a.a.p. title cards were made to cover up the Paramount originals on both the black & white and color cartoons. However, because Popeye cartoons were still in production at the time of the sale, in 1956, title cards bearing the copyright line (i.e. Copyright MCMXLI by Paramount Pictures Corporation, All rights reserved) were left intact. In recent years, due to efforts by Turner Entertainment Co., the Paramount references have been restored to the cartoons.

In 1969, the United Artists Corporation presented to the Library of Congress the earliest surviving preprint material from the pre-1950 film library of Warner Bros. (including First National library). The collection contains 200 silent features (1918–29), 800 sound features (1926–50), 1,800 sound shorts (1926–48), and 337 Looney Tunes and Merrie Melodies shorts (1931–48). While consisting largely of Warner Bros. releases, the collection includes nearly two hundred sound features released by Monogram Pictures Corporation between 1936 and 1946 and 231 Popeye cartoons produced by Fleischer Studios and Famous Studios released between 1933 and 1957. Most motion pictures exist in the original black-and-white/Technicolor camera negatives. The Library is converting the nitrate film to acetate safety stock and has obtained reference prints for seventy of the better known Warner Bros. features, such as Gold Diggers of 1935 (1935), High Sierra (1941), I Am a Fugitive from a Chain Gang (1932), The Jazz Singer (1927), and Little Caesar (1930). There are no United Artists films (such as James Bond and The Pink Panther franchise) in the United Artists Collection. The early synchronized sound Vitaphone shorts are lacking accompanying sound disc.

This is an enormous collection of nitrate negatives and masters, which are still undergoing transfer to acetate stock. Most of the safety film copies exist only in the preservation master stage, limiting accessibility for viewing and duplication. Some years ago, LC obtained 16mm prints (unfortunately, many are television prints, flat in picture quality and occasionally edited) for pre-1950 Warner Bros. features (among the most popular of all American films). Additional prints have been added to the collection, ranging from "reject fine grain master positives" (copies made for preservation but deemed inadequate) suitable for reference use, to sparkling 35mm prints reserved for theatrical projection. United Artists also donated 16mm prints of most of the Warner Bros. and Monogram films to the Wisconsin Center for Film and Theater Research, such as My Four Years in Germany (1918),[10] Conductor 1492 (1924), Midnight Lovers (1926) and Joe Palooka in Triple Cross (1951).

Titles and holdings are listed in the various M/B/RS catalogs. There are a number of published reference books on Warner Bros. films.[11] Copyrights are still in effect for most of the films in this collection; a donor restriction also applies. United Artists has passed through various hands, but current ownership of this material resides with Turner Entertainment Co.

Some of early Warner Bros. films wasn't donate to the Library of Congress and Wisconsin for Film & Theatre Research, but United Artists could donate most films to film preservation or private collector, for example, Just Another Blonde (1926), which the copy donated print to Hampton.[12]

Metro-Goldwyn-Mayer purchased United Artists (along with the a.a.p. library) from Transamerica Corporation in 1981 and became MGM/UA Entertainment Co..

Turner Broadcasting System (via Turner Entertainment Co.) took over the library in 1986 after Ted Turner's short-lived acquisition of MGM/UA. When Turner sold back the MGM/UA production unit, he kept the MGM library, including select portions of the a.a.p. library (limited to the Warner Bros. films and the Popeye cartoons), for his own company. The 1936-1946 Monogram films were not included with the purchase, and thus some of these films remain with MGM.

On June 16, 1982, Warner Communications began to buy MGM/UA's assets including United Artists Music Co. as well as pre-1950 Warner Bros. library (with pre-1948 Warner Bros. live-action and animation shorts) from MGM/UA. In addition, Warner would bring back pre-1950 Warner Bros. films to its library: the first half of WB was sold to AAP in 1956, which United Artists bought most of the oldest Warner Bros. films two years later, and the other half of Warner owns post-1950 films.[13] The MGM-Warner deal was terminated on July 28 of that same year, after two companies failed to complete acquisitions of MGM/UA's record company asset and pre-1950 Warner Bros. film libraries; the main reason is that the negotiations fell apart because of dozens of unresolved points, probably relating to the oldest Warner Bros. films.[14] The Warner Bros. film libraries were reunited when Time Warner, the studio's parent company since the 1990 merger of Time Inc. and Warner Communications (formerly Kinney National Company), bought Turner in 1996. Turner retains the copyrights to the former a.a.p. properties, while Warner handles their distribution.

UA originally leased video rights to their library (including the a.a.p. library) to Magnetic Video, the first home video company. Magnetic Video was sold to 20th Century Fox in 1982, becoming 20th Century-Fox Video. In 1982, Fox and CBS formed CBS/Fox Video, which continued to distribute the UA/a.a.p. library under license from MGM/UA Home Video until the rights reverted to MGM/UA. After Turner's purchase of the MGM/UA library, MGM/UA Home Video continued to distribute the films on video under license until 1999, when the rights were transferred to Warner Home Video. 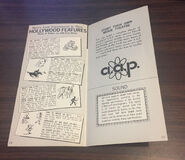