Ann Sarnoff is an American television executive who became the chairperson and CEO of Warner Bros. in the summer of 2019 as the first woman to hold the position at the company.[1]

Born in Wilbraham, Massachusetts on November 2, 1961, Sarnoff graduated from Minnechaug Regional High School in 1979 and started out as a strategic consultant at Marakon Associates.[2]

From 1993 to 2003, Sarnoff worked at Viacom in the corporate development department.[3] After leaving corporate, Sarnoff was the head of Nickelodeon consumer products and business development during Geraldine Laybourne's leadership of the company.[4] In 1999, while working at Nickelodeon, Sarnoff was part of a team that created the TV channel Noggin, a joint venture between Nickelodeon and Sesame Workshop. Sarnoff also helped create the television channel TV Land, which started off as Nick at Nite's TV Land in 1996.[5] Two shows she promoted were Rugrats and Blue's Clues. Sarnoff served as executive vice-president of business strategy and program enterprises at VH1.[6]

In 2001, she became chief operating officer of VH1 and Country Music Television, with the task of integrating the two channels.[7][8] During her time at VH1, Sarnoff launched the TV channel, VH1 Classic.[9]

In February 2004, Sarnoff was chief operating officer of the Women's National Basketball Association.[10][2]

In 2006, Sarnoff joined Dow Jones Ventures as president and senior vice president of strategy, a position she held for four years.[11][12] In this position, she ran the executive conference business for The Wall Street Journal.[13][14]

From 2010 to 2015, Sarnoff was chief operating officer of BBC Worldwide North America, where she worked with Herb Scannell, who she had worked with at Nickelodeon.[15] In August 2015, Sarnoff became president of BBC Studios Americas, formerly known as BBC Worldwide Americas.[16] In 2015, she launched the subscription TV channel, BBC Earth, and promoted shows like Doctor Who, Top Gear, Dancing with the Stars, Sherlock, Orphan Black, and Killing Eve.[17] From 2016 to 2018, Sarnoff was head of BBC Worldwide's Global Production Network.[18] In 2017, she launched Britbox, a streaming service for North America.[19][20] 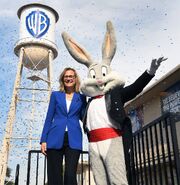