Animaniacs: a Gigantic Adventure is a video game based on the Jazz Jackrabbit 2 engine developed by EAI Interactive and SouthPeak Games and released on June 15, 1999.

Thaddeus Plotz, after many years of dealing with Yakko, Wakko, and Dot has decided that they must go and orders Ralph to round up all the Warner siblings merchandise (posters, awards and old films) and hide them around the studios. While doing that, Plotz orders for the Warner Siblings be locked up in a psychiatric hospital. However, typical of the three, they escape and it is up to the player to retrieve all of the hidden goodies.

The gameplay is like that of a side-scrolling video game in which the playable characters jump from one platform to another. The player gets to take control of a different Warner siblings at different levels and environments and they're armed with different weapons. 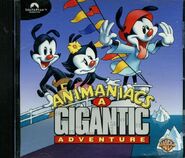 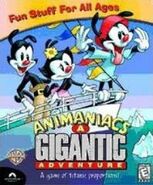